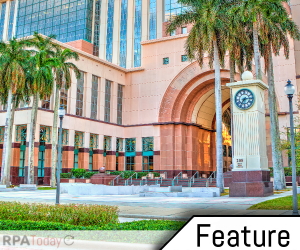 For those raised on television and movies, the notion of a county court evokes images of stately brick buildings and folksy attorneys in seersucker suits. What doesn’t spring to mind is a cutting-edge operation hyper-focused on efficiency, pioneering the first artificial intelligence and RPA implementation in the U.S. at the county government level. But that’s exactly what happened in Palm Beach County, Fla., when it began looking at its document filing and docketing process in 2016.

The Clerk of the Circuit Court & Comptroller, Palm Beach County (The Clerk’s Team) began considering automation for the same reason public and private sector organizations around the world are doing the same: resources.

“The Clerk’s budget has been dwindling for a long time and we’re constantly asked to do more with less,” says Parik Chokshi, director of Enterprise Applications at Clerk of Circuit Court & Comptroller, Palm Beach County. “So we had to figure out a different way to move forward, where we could be efficient and make sure we continued to serve the public to the best of our ability.”

Five years ago, the ecosystem around AI, RPA and automation was very different. At the direction of the Clerk’s Chief Operating Officer of Courts, Michele Nelson, director of Court Operations and Anthony Tuozzo, manager of Operations Systems, were tasked not only with identifying what they wanted to automate, but how they could do it, given the technology available at the time.

The Clerk’s team turned to a vendor they already were working with—Computing System Innovations (CSI), a provider of automated document redaction software—to help them set out on a path none in their sector had ventured down before.

Building an Automation System from the Ground Up

By 2016, the state of Florida had established an e-filing portal through which attorneys could submit documents and paperwork connected with cases before Florida courts. The tens of thousands of filings that come through the portal each week, until that point, had all been received by human clerks and manually verified and docketed (i.e., associated with the correct case, tagged and indexed so that it can be found in the court’s records)—a process that generally takes up to three days and comprises a wide variety of documents.

It was a natural place to start. Automating some of this work would enable the Clerk’s team to handle filings that came in through the portal during off hours and lessen workloads on clerks during the day. Tuozzo, Business Analyst Mary McMillan, and the Clerk’s team identified document types that were filed in high volumes but didn’t usually require further follow up from a clerk—a low-risk scenario on which to test a new system.

The system, which was custom built by CSI for the Clerk of the Circuit Court & Comptroller, works in three parts: classification and LBX (learn-by-example), which leverage AI technology, and RPA. Chokshi notes the implementation would not have happened if it wasn’t for the efforts of Mary McMillan and IT Supervisor Ryan Thomas:

“They worked hand in hand to ensure that the system was configured to satisfy business needs taking into account all the efficiencies that would benefit the Clerk’s office.”

To teach the AI how to classify documents it retrieved from the e-filing portal, the team ran thousands of example documents through the designer, training it to recognize and categorize them. After the training, audits found the system classified documents accurately 98 to 99 percent of the time—better than humans were able to do.

While classification is fairly simple, the LBX process is more complicated. For certain filings—a notice of hearing, for example—clerks are required to pull certain information from the document and add it to the docket. Again, to teach the AI, the team fed thousands of electronic documents through the system with instructions to extract the required information via OCR and index it properly. And again, audits showed the system was able to accomplish its automated tasks with an extremely high degree of accuracy.

Finally, the system leverages UiPath’s RPA robots, so the process follows the steps a human would take, making it easier to visualize the process and ensure that the automation was doing the right things.

“We were able to overlay this on top of our case maintenance system,” Tuozzo explains. “It didn’t require the vendor to get involved. You can see the robots doing the docketing, you see the mouse move. It’s like an autonomous car you see driving down the road with no driver. You see the mouse navigate, double click on certain areas, and type in the information.”

Once the system was trained and established, the Clerk’s team conducted audits of 100 percent of the robots’ work for about a month. And, according to Tuozzo, “we found the robot really didn’t make mistakes. And if they did, we were able to retrain them and they wouldn’t do it again.”

The Clerk’s QA team continues to audit 10 percent of the robots’ work (Tuozzo refers to the entire system engaged in a process, inclusive of the AI and the RPA, as a robot)—the same as a human clerk. Using the system conceived in 2016 and developed and implemented over the following 18 months, the Clerk’s team has automated about one-third of all the e-filings that come in through the portal.

“We didn’t understand everything that it was going to be able to do for us,” he continues. “As we worked on it, we realized that the only limitations are the ones we placed on it. If I’m able to write down steps for anything, we’re able to automate it. And really, as the technology becomes better, as more people have been getting involved in it and we’re able to talk with other institutions that use it and we learn more, our goal is to be doing more than half our documents this way.”

The most exciting development on the Clerk’s roadmap is implementing an AI capability called “real-time learning.”

When the team first developed its automated docketing system, it required training the AI with thousands of examples. If the system did not recognize a certain type of document, it wasn’t able to process it. But the county is preparing for a new install that will learn much faster and with far fewer examples.

“Now, if a robot runs into a situation it doesn’t recognize, it goes into a queue to be manually reviewed by a clerk. Once they fix it, the robots pick it back up,” Chokshi explains. “But soon, when an exception goes into this queue, the robot will watch what the clerks do. It will build up its own intelligence and once it hits a certain confidence level, we can determine that we don’t need a clerk to review that kind of issue anymore. We believe that’s going to be a real big game changer for us in the future.”

The Clerk’s team is constantly looking at updates from its technology providers, including CSI and UiPath, to see if it can expand its automation program. And, Chokshi notes, the county is looking at other applications in addition to the courts where the AI/RPA synergy can bring efficiencies. The finance department, for example, is very interested in what the court’s system could do, if adapted for them.

In the end, a system that was developed to enable the organization to deal with budget pressure, to make do with less staff, has done exactly that. And, it has allowed the employees its does have to apply their talent to more customer-facing work.

“For our workforce, it allows humans to focus on more complex work and jobs that can’t be automated,” Nelson concludes. “A robot, at this point in time, cannot be a courtroom clerk. It can’t sit at the front counter and serve a customer. Maybe in the future, but not right now.”

If you liked this article, please sign up to RPA Today!  Registrants will receive our free weekly RPA newsletter updating you on the most recent developments in the Robotic Process Automation, Intelligent Automation and AI space. In addition to news updates, we will also provide feature articles (like this one) with a more in-depth examination of RPA issues for end users and their enterprises