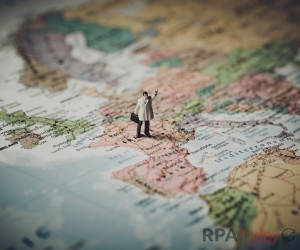 A new report on secular “supertanker” trends identified artificial intelligence—and specifically called out RPA as an important subset—along with global warning as the two forces that are having the largest impact on global investing.

“From the algorithms dictating our social reactions online, to cars that drive themselves; from routine process automation in our workplaces, to the disruption of traditional industry sector boundaries, the current status quo looks to be swept away by advances in computer thinking,” said authors of Future 2024—Future-Proofing Your Asset Allocation in the Age of Mega Trends in the report’s foreword.

The report, produced by U.K. research firm CREATE-Research for BNY Mellon, assessed how investment is changing in the face of climate change and revolutions in artificial intelligence. “Both of them are pathways of development that interact via complex feedback loops,” the report said. “Both are now acknowledged as secular investment themes, which might not seem material at the outset, but could be hugely consequential in hindsight.”

While the report doesn’t delve too far into RPA, it does mention its role moving automation beyond low-skilled manufacturing jobs. Part of the reason asset managers and pension consultants are looking at RPA, the report said, is that it will “hit knowledge-based professions such as law, accountancy and finance, which until now were thought to be immune to the rise of robots. Clearly, advances in natural language processing, high-level reasoning, voice recognition and pattern recognition make AI ‘blind to the color of your collar’.”