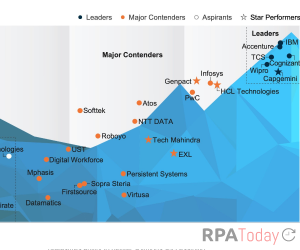 The Everest Group, a global technology consultant based in Dallas, has released its annual evaluation of intelligent process automation (IPA) “solution providers.” The company, which produces a “PEAK Matrix” report for dozens of technology sectors, named Accenture, Capgemini, Cognizant, IBM, TCS and Wipro as its leaders in the space.

The assessment ranked 28 companies that source, consult on, implement and provide maintenance for intelligent automation technology for clients. It evaluated those firms on two axes—”market impact” and “vision and capability”—and separated them according to their position on the matrix into “aspirants,” “major contenders” and “leaders.”