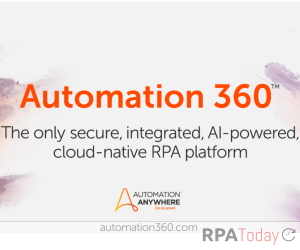 Automation Anywhere has rebranded its enterprise RPA platform to align with its cloud-native approach. The San Jose, Calif.-based technology provider announced the change in branding from Enterprise A2019 to Automation 360 along with several updates to the platform it says includes “significant enhancements” to several core functionalities.

The company pointed to an improved version of the Workspace module, its low-code tool for creating RPA workflows, that will make creating RPA automations simpler for citizen developers; integrated Intelligent Document Processing in IQ Bot; and better process mining capabilities in an updated version of Discovery Bot.

Automation Anywhere has been migrating users to the Automation 360 platform since it began informing them last September that it would no longer support its Enterprise 11 platform. The company said the name change highlights its cloud-native nature as that becomes the dominant mode of delivery in the software space.

“Organizations are quickly realizing that deploying their RPA initiatives in the cloud, and the productivity gains that come with it, offers increased efficiencies, reduced time to market, and improved customer and employee satisfaction,” said Holly Muscolino, research vice president for IDC’s Content Strategies and the Future of Work research services, in an Automation Anywhere release. “In fact, IDC predicts that by 2022, 45 percent of repetitive work tasks in large enterprises will be automated.”