Ahead of the Curve: Q&A with Ron Woody of USDA 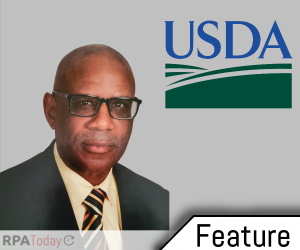 Fair or unfair, federal agencies in the U.S. have not traditionally been known as nimble organizations living on the cutting edge of technology. The government, however, is embracing RPA. In June of 2019, the General Services Administration formed a RPA Community of Practice (CoP) specifically to explore opportunities throughout the federal government to leverage RPA. The CoP has even published a “playbook” that will give agencies interested in the technology a better chance to succeed. Some agencies, however, are not only outpacing others in the federal system, they are ahead of many in the private sector too.

The United States Department of Agriculture employs 100,000 people across 29 different internal agencies. Any organization with that many employees almost certainly has inefficiencies that could be addressed using RPA. So, in 2017, a full two years before the GSA launched the RPA CoP, the acting CFO, who had been hearing about RPA’s benefits from her peers in the finance community, found some funding for a pilot.

Ron Woody, an IT project manager in the Office of the Chief Financial Officer (OCFO) of the USDA, was tasked with managing the pilot project. From there the RPA program grew quickly. This year, due to mandates from the Office of Management and Budget, responsibility for RPA in the agency transitioned to the Office of the Chief Information Officer (OCIO). But Woody remains on the USDA’s RPA service management organization board, with a vote on approving any USDA-wide RPA projects.

RPA Today recently sat down with Woody to talk about the genesis of RPA in the USDA, its growth and how a tiny pilot led to an enterprise strategy that spans the entire agency.

RPA Today: In 2017, RPA was in its infancy. What was it like getting a program started at that stage of the technology’s existence?

Ron Woody: My research at the time showed most of the people using RPA in other agencies had the bots working on laptops. From a holistic IT perspective, there were some major security concerns about operating this way. So, the first major decision we made was to deviate from this path. We decided we were going to put this on a server platform and standardize the software. We did an evaluation of four different vendors and settled on UiPath.

Since we were in the office of the CFO, we were looking at financial applications. We had one particular application that would take fiscal year funds and distribute them to the different agency allocations. This took up a lot of human resource time and effort so we thought it would be a good candidate.

It also had enterprise capability, meaning, it’s not just limited to use in the OCFO’s office, this is something that, if we got it working, we could expand it throughout the USDA. That turned out to be a significant insight for us. As the program expanded, we always had an eye on building bots with the potential to be leveraged by departments across the entire agency.

To set up RPA in a server-based environment, however, took a lot longer than it might have otherwise. We had to go through all the security checks, get bot access to applications, get firewalls opened, etc. It also took time getting the UiPath ATO (Authority to Operate). But given all that, the benefits were well worth it. We had an environment that was much more robust. We could easily expand on to it. As we started to grow, the infrastructure was there.

It took off much faster than we anticipated and had to quickly develop structure for designing, developing and maintaining RPAs.

RPA Today: How are you handling governance models as you expand?

Ron Woody: Our first thought was to establish a service management organization. We needed to have an understanding of all the bots our financial offices were interested in developing. We started looking at strictly financial applications, however, OCIO came on board and partnered with us to support financial and other RPAs including an Acquisition Approval RPA sponsored by OCIO. Shortly after approving the OCIO RPA we were approached by our Human Resources Office for two additional RPAs to support reassignments and awards.

We realized in the very early stages of establishing an RPA environment we would need structure and policies to ensure RPAs are delivered efficiently, effectively and with integrity which led to the setup of our Service Management Office (SMO).  The primary goals of the SMO are:

RPA Today: You’ve reskilled many employees in your office by training them in RPA. How and why?

Ron Woody: OCFO funded the initial one-week training of 10 OCFO employees with the intent to retrain to support our future RPA initiatives.  This would include being able to oversee vendor support for bot development; the ability to design, code and become proficient with RPA development.

Last May, OCFO took four cohort grads and started an RPA team, which I am leading. This team is looking at completing capstone projects that hadn’t been completed.  By the time this article is published, our OCFO RPA team will have deployed 1 to 2 bots that are fully designed, developed, tested and deployed by our team which will be a major milestone.

We have a list of other RPAs we will begin deploying into production in FY21. This makes us less dependent on the vendor support and gives our team a chance to build their proficiency in RPA development to take on more complex RPA projects in the future.

RPA Today: How many processes have you automated and how do you determine the value RPA delivers to the organization?

Ron Woody: OCFO will have 18 RPAs in production by end of FY20. We currently have 16 OCFO bots in production. Our initial budget bot has been expanded to include other agencies or mission areas within USDA. These bots that expand to other USDA agencies are considered enterprise bots.  The budget bot has been deployed to Farm Production and Conservation (FPAC) and Food Safety Inspection Service (FSIS).

As for how we measure value, we developed an intake form that examines system tasks to be automated; the annual number of man-hours saved per person; and the average paygrade of staff who would have done the work. We do math calculations to establish cost avoidance and ROI.

Dollars and cents are important; however, we look at getting bots into production to free up our human workforce to do more complex and analytical tasks.  We are freeing our human resources from the mundane key stroke and mouse click tasks to allow more critical thinking tasks to be completed.

RPA Today: Are you in contact with peers in other agencies? Both to learn from the and to share your experience for their benefit?

Ron Woody: Yes, we absolutely are. When we first started RPA, our major contact was GSA. Since then, I’ve spoken with HUD, Homeland Security and others. Many have asked us about our governance structure. I’ve provided information and had dialogue with them on many of our lessons learned. Then there’s the Community of Practice (CoP).  Several federal agencies are involved with the CoP to share our lessons learned as well as RPA governance and other helpful information.  The RPA CoP for federal agencies has an open door to sharing info, technology and experiences within their respective organizations.

RPA Today: USDA in general, and OCFO in particular, seem to be ahead of the curve. Do you agree with that?

Ron Woody: During the initial stages of setting up our RPA server, OCFO took a giant leap ahead of many agencies in USDA. Our structure allowed us to get bots set up quicker. Over the last 18 months, that curve is probably flattening a bit due to the many RPA initiatives in process within USDA. We are looking at more enterprise RPAs to develop within OCFO that will provide value throughout USDA. We will continue to analyze processes that benefit the OCFO community only, however, emphasis and priority will be placed on financial RPAs that benefit the entire agency.

RPA Today: Has identifying processes become more difficult as you work your way through the proverbial “low-hanging fruit”?

Are opportunities harder to identify? I wouldn’t say so. But we are getting more strategic with the processes we identify as we gain experience.

RPA Today: Do you have advice for RPA Today readers who are at the beginning of their automation journey?

Ron Woody: First and foremost, always partner with your security team. That will make things go much smoother when establishing Authority to Operate (ATO) on systems and getting Bot credentials to applications. Second, build a structure where you can train your employees to better understand the mechanics of RPA and evolve to providing vendor. The more understanding you have from your own team, the more productive you will be in the long run.