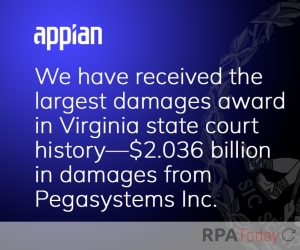 According to a Reuters report, the award stems from a May 2020 lawsuit in which Appian accused a government contractor hired by Pegasystems who had access to Appian software of helping Pega improve its products and more effectively train its salespeople based on the knowledge.

“We put forward strong evidence that Appian trade secrets were misappropriated by Pegasystems,” Christopher Winters, general counsel at Appian, said in a statement. “The award of substantial damages to Appian is entirely appropriate given the nature and extent of what Pegasystems did.”

Appian said it presented evidence during the trial that the contractor met with Pegasystems executives, including Founder and CEO Alan Trefler, to share information that included video recordings of the Appian development environment.

The $2.036 billion in damages, is believed to be the most ever awarded in a Virginia state court. Pegasystems said the verdict was the result of “significant error” and will ask the trial judge to set it aside. It also plans to appeal the ruling.