Assessing the State of Process Discovery 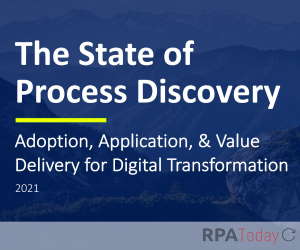 In 2019, Gartner called robotic process automation (RPA) the fastest growing category in enterprise software. Today, RPA maintains that lofty status, despite the fact that the total RPA market is expected to reach just $2 billion in 2021, according to the International Data Corporation.

While that number may seem relatively small for a category expected to be “the next big thing,” it suggests there is still a great deal of room for growth. For organizations that have experienced challenges when trying to scale RPA programs, tapping into that room requires assistance. According to the results of a new report from Blueprint Software Systems in partnership with Sapio Research, help is on the way as businesses increasingly are turning to process discovery and task mining tools.

Process discovery (also called process intelligence or process mining) has become an increasingly important part of the automation strategy for companies. It’s technology that records, maps and analyzes an organization’s business processes, yielding insights that can help them identify processes that can and should be automated, reveal bottlenecks and inefficiencies, and reduce operating costs. But, according to Blueprint Software Systems Chief Revenue Officer Charles Sword, organizations are beginning to think about their processes – in and of themselves – in a more strategic way.

“I think that there’s a real shift in the market to view process management as a strategic asset for an organization,” says Sword. “What’s been made apparent by automation is that there is still so much that can be done to drive efficiencies in many of those processes. So there’s a spotlight on it. RPA helped bring that about.”

In interviews with 400 top executives at businesses ranging in size from 500-10,000-plus employees, The State of Process Discovery found more than 56 percent of the organizations polled are already using process discovery/task mining tools to help them to recognize, visualize, and improve business tasks, with an eye toward identifying opportunities to leverage RPA. Of those companies not currently using this technology to improve and automate business tasks, 38 percent are in the process of implementing one of these tools, while 33 percent are considering the use of process discovery technology in the future.

Adoption, however, is more widespread in several industries. Financial services, for example, has the highest reported adoption of process discovery technology at 31 percent. This should come as no surprise considering financial services’ intent to accelerate digital transformation to compete against digital disruptors.

At 20 percent, retail is the next highest reported industry using process discovery/task mining tools, driven by both a desire to provide customers with optimal digital experiences and a need to digitally transform their supply chain activities. Process discovery adoption in the banking industry (14 percent), manufacturing (12 percent), and healthcare/pharmaceuticals (10 percent) round out the top five industries, according to the survey findings.

While the survey confirms the popularity of process discovery across the business spectrum – and by extension, the potential for RPA’s continued growth – it also sheds light on the fact that the benefits organizations anticipated prior to implementation don’t necessarily match the benefits they actually realized.

The most common benefits actually realized by those polled were improved quality and performance of task execution (experienced by 48 percent of survey participants); improved task visibility (44 percent); and improved compliance (44 percent).

Why the disconnect? Some employees are uncomfortable because task mining often involves recorders that sit at the desktop level and record the tasks a user completes, causing security and privacy concerns, says Sword.

“The notion of the pervasiveness and invasiveness of some providers’ approaches was expressed multiple times in the survey,” Sword explains. “We’ve also heard anecdotally that people are sometimes uncomfortable with how these new tools were deployed and what it meant for their coworkers and for their organizations.”

Another factor contributing to the delta between anticipated and actual benefits is the time required to manage and monitor the data task mining produces via AI, resulting in a significantly longer time to value for improved task efficiency.

“These tools hoover up tons of data,” Sword notes. “And I think what we’re finding, and this was a hypothesis that we had internally at Blueprint, is that the technology being applied by many of the available tools to distill that data into usable information just isn’t quite ready for prime time.”

In addition to consent and privacy concerns – particularly in highly regulated departments or industries – survey participants also cited time required to manage and monitor process discovery/task mining tools (noted by 30 percent of participants); the volume of data produced (24 percent); the incompatibility of task models with output tools such as RPA platforms for automation (24 percent); difficulties identifying where to start mining and prioritizing subsequent activities (22 percent); and employee resistance (19 percent).

Interestingly, the challenges identified in implementing process discovery/task mining tools differ somewhat by industry. For example, while financial services and insurance companies cited privacy concerns as their largest obstacle, manufacturers and telecommunications firms reported the time and effort to manage this technology as their biggest challenge. Healthcare organizations identified a lack of dedicated teams to manage process discovery as their leading pain-point. Retail companies said prioritizing and identifying the areas of their business in which process discovery would have the most impact as the top challenge they are confronting.

The challenges posed by process discovery even vary by department. IT identified security and privacy concerns as their largest barrier, while finance and accounting cited employee resistance, and operations pointed to a lack of a dedicated team to handle process discovery.

Looking ahead, what does all of this mean for process discovery and, by extension, RPA? On average, large organizations of 500 across all industries invest $336,000 on average in process discovery/task mining tools annually. Eighty-one percent of those using or considering using process discovery expect their investment to increase in the next 6-12 months, with none saying they would stop using the technology despite the challenges encountered.

Anecdotally, according to Sword, it appears many of the companies frustrated by the challenges and gaps in process discovery/task mining tools want to change their approach. These organizations are beginning their process discovery efforts by turning to those employees who already know how the business operates and can readily provide the insights needed to identify and map out the higher-level processes the company currently uses.

With these higher-level processes in hand, organizations can then move more rapidly to identification of the low-level, detailed task information (i.e., the actions, parameters, screenshots, inputs, value metrics, and applications with which each task interacts) which underlie the services being used, the specific activities being undertaken, and the specific boundaries of those activities. This low-level task information allows organizations to more accurately assess whether a specific task represents a viable candidate for automation. If so, it will also help to speed the development process because it is these low-level details that need to be coded in any automation.

To identify the details of these low-level tasks, providers such as Blueprint are offering more accessible and functional human-driven task capture solutions to discover and document tasks the company currently is performing.

“We’re taking a direct, almost totally contrarian approach to how we develop that technology,” Sword explains. “It’s by permission only, it’s an inclusive process. It’s not pervasive, it’s not resident on the desktop monitoring everything. It’s not Big Brother.”

Once a task capture solution is triggered by an employee, it functions largely like a task mining tool, recording each interaction, taking screenshots at each step, and then mapping all of that information into a process editor where it can be further modified and optimized to determine whether the task can then be automated. It differs from a task mining tool however, in providing substantial control to their human users.

As more organizations recognize the ability of these human-driven, task capture tools to collect the details of each task needed for their digital transformation, they are also realizing that process discovery doesn’t have to rely exclusively on a technological solution. Internal process owners already understand how their business works and can easily define and model higher-level processes. Rather, it is the low-level details of each task, collected in a way that isn’t intrusive and doesn’t produce an overwhelming amount of data that are needed most. And that is precisely the point where technology in the form of task capture solutions can make a difference, all of which bodes well for the continued growth of RPA.