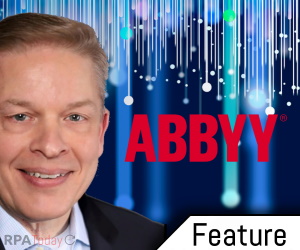 In August 2019, Digital Intelligence provider ABBYY acquired process intelligence company TimelinePI to bolster its offering for organizations implementing RPA and other intelligent automation programs. Recently, ABBYY named Scott Opitz, TimelinePI’s founder, and CEO, as its Chief Marketing Officer. Since the acquisition, Opitz and ABBYY have worked to deliver companies enhanced intelligence enabling them to analyze current processes with an eye toward how RPA can improve them.

RPA Today publisher Steve Casco sat down recently with Opitz to talk about Process Intelligence, how it can be utilized to make RPA better and what is in store for RPA as the technology evolves.

RPA Today: Entrepreneurship is a leap, not many people are willing to take. What was the journey that led you to found TimelinePI and, then, to ABBYY?

Scott Opitz: Some of us are foolish enough to do it more than once [laughs]. I was trained as a scientist originally —a chemist. To do my research at the time, I needed to build data capture boards and wrote my own software. I didn’t think much about it at the time. But, apparently, I learned quite a bit along the way.

When I needed to fund my graduate work, the fact that I knew about computers made me quite interesting to a lot of organizations. I took what I thought was a temporary experience—getting into the computer industry to fund my PhD—and fell in love with it. Initially, I got into the hardware side of the business for my early companies but quickly switched to software.

I’m a card-carrying data geek. I love analysis and data and making it accessible to mortals. A big part of all our companies has always been pushing the envelope on intuitive user interface and making software accessible to a much broader range of users. In the 1990s, that led us from data to business process management (BPM).

We began blending workflow with BPM, which led to analytics and business intelligence. When we went out to our customers on the process side, we realized they were quite unhappy with the products available in the market. So that was the next hill to take. Ultimately, the last company which took me to ABBYY, arose from the combination of the deep business intelligence of analytics, the deep history of process, and the realization that no one is applying data for analyzing process adequately.

You don’t become an entrepreneur thinking you’re going to make a fortune. You might get lucky along the way and have some successes. Still, no serious entrepreneur I know, who does it over long periods of time, would ever tell you it’s about the money. You have to be passionate about what you’re doing. That’s very true for myself and my co-founder.

RPA Today: Walk us through process intelligence and how it differs from process mining.

Scott Opitz: Process Intelligence is a combination of ideas people have been exposed to over the past 10 or 15 years. There are three parts to Process Intelligence. The first major part of it is process mining. We want to reconstitute an organization’s process histories—how it actually performed all the operations—based on data, not people’s assumptions.

A classic problem is if you want to do a process improvement project, you hire a consulting company to come in. They would do interviews to map the processes and have a whole wall covered with post-it notes with pieces of string tied between them. They literally call the analysis “walking the wall,” which is going back and forth over it trying to find the places you could improve.

The idea of process mining, on the other hand, is to make it objective by taking the data that says exactly what happened and reconstituting it into a form that allows you to understand it visually. I don’t care how ugly the process is, how ad hoc, or variable, you want your technology to discover what is going on. So, the first key difference to our approach is the ability to mine and reconstruct any process type – no matter the how complex. But, that’s only the first phase.

The second part is the analysis, and this is important. You need to make available to your users all the process details assembled in an interactive model accessible by all of the specialized types of analysis they need, even without them knowing what to ask for. And, you need to give it to them in a form where the results are ready to be consumed without them having to be coders to set it up.

The last part of what makes up process intelligence is process monitoring. It’s great that you can see your process, it’s great you can analyze it and know what action to take. But wouldn’t it be great, after you take that action, to be able to monitor it and make sure it’s behaving as expected?

For example, this is a huge problem for RPA vendors and their customers. After you deploy a bot, the reality is you want to know if it’s doing what you thought it would. That’s why we think end-users should be focusing on Process Intelligence. You really need all three of those pieces to give yourself a full view of it.

RPA Today: What is the relationship of ‘task mining’ vs process mining?

Scott Opitz: I would argue that task mining is the state of the industry right now, and we’re fighting to get past that. The bulk of RPA vendor technology right now is what is best called Robotic Desktop Automation—copying some data from one application to another, going through a tedious set of screen transitions to integrate two systems. It all has great value and can improve productivity. But it is very much about working within a specific task and trying to automate some otherwise tedious steps.

The reality is that we are only at the very beginning of anything that even begins to look like enterprise-level process automation. It’s going to take enhancements to RPA tech, some of which we already see from some BPM vendors that have acquired RPA technology. The analysis of the desktop is “what are the tedious steps in a small portion of a process?” The analysis of the overall process is where the big opportunities are to improve your overall operation. The tools we use to analyze what happens on a desktop are different from the tools we would use to analyze a 30-step long end-to-end process.

RPA Today: Is there any potential friction between solutions like yours and consultants? Is it tough to maintain channel partners when the sophistication of your software means it might be doing many of the things an end user would pay a consultant to provide?

Scott Opitz: Historically, it may have started that way, but not anymore. The large consulting organizations and specialty consultants realize that going in and charging a customer to do time and motion studies is just not good business. There’s no ability to differentiate yourself.

But, I’ve seen a tremendous evolution. It’s not about charging billable hours to get the data. It’s about understanding how to interpret information and advise a customer how to put it into action. Every partner we work with has adopted this worldview. Now it’s the speed with which they can gain these insights, which makes them able to win bigger deals than your competitor. Fortunately, the relationship between providers and channel partners has matured tremendously.

RPA Today: How do you see the business model in the automation industry evolving?

Scott Opitz: There are two things at play. One is pricing. The idea of pricing based on exorbitant fees for individual processes is ludicrous. It’s a flawed model. We provide flexibility. Customers can buy very small quantities based on data volume, project counts, based on how they want to do business. I very much believe in flexibility on that count.

Where we’ve gone in and started small, customers fall in love with the technology, and they find there are a hundred other areas they want to apply it. It grows naturally, and it’s best not to force that. Right now, there are two things we hear from customers. They don’t want to be locked into a single vendor, and they want portability. The idea that someone would want to buy everything from one vendor is not attractive to customers.

The second part of our evolution is around the effect of consolidation. One of the things ABBYY saw in TimelinePI is that we were already doing work in digital transformation. They also recognized the importance of process was emerging very quickly. Our ability to combine ABBYY’s strength and reach into many verticals with Timeline’s Process Intelligence means we can deliver pre-configured collections of projects for vertical industries, which allows them to benefit even more from the analysis tool.

That’s the wave of the future: the marriages you see going forward will be driven by organizations that can get a multiplier effect.

RPA Today: What is the main benefit of process mining that people aren’t aware of?

Scott Opitz: If you have complex processes, you want to be able to predict what the likely outcome of the process will be. If it’s a patient in an ER, will they be admitted or discharged? It would be beneficial to know very early so you could tee up resources to serve the patient better. You can translate that to another business, say a customer service application. If I knew more sooner, I could take an action that would make the outcome better. But, variability from one process to the next makes it difficult. It’s not that you couldn’t eventually apply data, it’s that you don’t know what to apply.

We figured out that we can take all this data we mined out of processes and train a neural network to find subtle influences and combinations that are beyond us as humans to spot in any manual way. By simply loading up that data and training a neural net with it, we’re able to do a very good job at predicting very early in a process lifecycle what its end state would be or whether a future action will be performed on time. I think the opportunity to do both prediction and prescription, the ability to actually suggest the most efficient next set of steps to get you to what you define as your goal. I think that’s going to be one of the most significant benefits of gaining all this process insight.