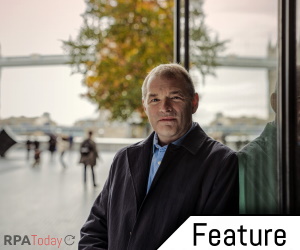 Blue Prism is one of the early pioneers of RPA. Jason Kingdon is executive chairman of the company. He has been with Blue Prism nearly from the beginning, using his AI expertise as a founder of the Intelligent Systems Lab at University College London (UCL) to establish Blue Prism as one of the recognized leaders in the RPA space.

Jason sat down with RPA Today Publisher Steve Casco to talk about his beginnings, what led him to RPA, how Blue Prism is evolving as a company in a new competitive landscape and what its vision of the future of RPA entails.

RPA Today: It hasn’t been that long for RPA as a commercialized technology. But, describe how you came to recognize its value in the early stages of the technology’s existence.

Jason Kingdon: I started life as a researcher at UCL where we were one of the first to put a neural net live for financial forecasting in the early 1990s. My first business, called Searchspace, created this thing called intelligent transaction monitoring that the London and New York stock exchanges used to look for market manipulation, insider trading, money laundering, etc.

After we sold that company, I was helping UCL encourage young technology entrepreneurs commercialize their ides. As part of a “tour of duty” talking to various people involved in early-stage businesses, I spoke to the Manchester Technology Fund. They said they had a company that was very interesting, but its investors were losing their patience. They asked me to have a look.

I met the Blue Prism founders in 2007. At the time, there were about 10 employees, £30,000 ($37,000) worth of future business and maybe four customers. They were in a tricky spot. But, the minute I saw the product I thought it was very different and a key insight had been achieved here.

Blue Prism seemed to have solved this issue. Instead of getting all these machines to talk to each other the way machines like to talk to each other, it mimics the way human workers access and read the user interface – to interoperate and orchestrate any third-party application.  Once you’ve made that insight and the engineering is robust enough, that becomes a very reliable way of having systems interoperate.

To me, a huge explosion of capability was absolutely obvious from the minute of seeing it. At the time it wasn’t getting any attention in organizations. But, I went to a customer called Shop Direct and met a person there who demonstrated the product to me. She had left school at 16, joined the call center and had been given a Blue Prism software robot to control because she had a good basis in the process. She told me she was controlling a task that would have taken her and others off the phone for three weeks. With the robots it took a day. So, you have a citizen developer, a business user, an operations person, who has no technical specialty, high-school level, and she was fully fluent in this tech.

Over the last four years we’ve gone from 60 to over 1,000 people, we’re selling in 170 countries to 70 commercial sectors. But, I think the breadth of that and the impact of that is still being digested all these years later. That revolution is still working its way out, people are still thinking about it.

RPA Today: Blue Prism has launched the concept of “connected-RPA.” What does that mean?

Jason Kingdon: One view of RPA is that it’s a form of digital assistant for a single person. Give the technology to an individual and that individual uses that digital assistant to do all kinds of time-saving activity. And, that’s great, but it’s not taking full advantage of RPA in an enterprise.

It can be like the revolution of robotics in manufacturing. You have the assembly line and, as the line goes on, you have this ballet of robots around the manufacturing floor that construct whatever it is you’re making. Maybe even the building is even designed around how you’re making use of the automation. That’s a real organization of work.

RPA in an enterprise context must be server-based and connected to all parts of the organization. Every time you train a robot to do something, it has to be published to a centralized standard and the published robot and the components of that robot are now accessible to everyone else in the organization.

It’s a collaboration platform across an organization, where the number of automations you build are compounding all the time. In order to get that idea over, we introduced the word “connected”—bringing an organization together. We also thought it was a way of shining a light on the interoperability aspects and the way you can connect to brand new technology coming along.

RPA Today: What goes on at a Blue Prism Discovery Workshop and how can someone take part?

Jason Kingdon: There are actually a number of formats we are introducing. There is so much to consume here that we’re figuring out better ways to communicate it and to get people closer to what it is you can do with RPA. To change the way you think about it.

At one end of the spectrum we’re taking the technology to executives. We do a day of hands-on to show them this capability so they see they can do it themselves. Now, they can imagine it in the context of their business. At the other end of the spectrum it’s about talking to organizations: How do you think about business processes? How do you think about the concept of a digital worker and how does the notion of a digital workforce manifest itself? They are the principles we’re trying to bring alive.

In terms of the Discovery Workshops, there are various ways you can engage in person or virtually.

Jason Kingdon: One of the things that’s kind of hidden is that this interoperability doesn’t just apply to business processes within a single organization. Business processes and flows go across multiple organizations. You see this in price-comparison offerings. You see this in service switching that’s done automatically for you. That’s across multiple providers. It’s a new way of thinking about things and pretty much anything you can imagine you can figure out how to do.

RPA Today: How will the entrance of Microsoft in the RPA space affect the competitive landscape?

Jason Kingdon: It underlines the importance of the technology. From a business objective we know that Microsoft has enormous resources and we will have to take that into account. In terms of overall direction, I think all the major platform providers will be offering this tech in short order. It’s too powerful not to.

But, we’re in a good position. The depth of the insight within the technology itself is underestimated. Just because you can build something yourself, you might not know enough to be doing it for everybody.

An area where differences will emerge is we are genuinely committed to interoperability of technologies. That’s really central to everything we do now.

RPA Today: What’s ahead for RPA, in general, and Blue Prism, in particular?

Jason Kingdon: Once you get into more sophisticated uses for robots and a larger scale digital workforce, we have to be very mindful of how we deliver RPA technology. We acquired Thoughtonomy because we saw cloud as being something that was increasingly important for everybody. In addition to being leaders in cloud, they had also been very thoughtful about RPA technology they had put around the product to complement it.

In addition to cloud, Blue Prism has leveraged the acquisition of Thoughtonomy in several ways. We have merged the code bases which has given us access to analytics enabling better ways of looking at the robots, seeing how they are deployed, seeing all the activities taking place.

How do you build a platform for that kind of capability? If you do have this technology distributed across individuals’ desktops and they use it in individual contexts, that helps the individual but doesn’t help the organization.

Can anyone publish anything in your corporate voice? No. But at the same time you have to allow accessibility and allow this technology to be out within the business. It’s that balance we’ve seen achieved successfully in a number of different ways.