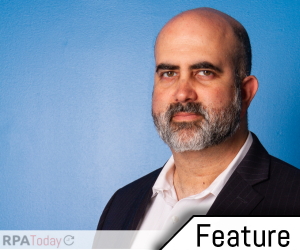 NICE was founded in the late 1980s focused on enabling companies to record their contact center interactions. Since then, it has grown organically and via acquisitions into a $1.6 billion enterprise offering a range of services including its original contact center recording, workforce optimization, data analytics, fraud prevention and process automation.

The company is not a newcomer to RPA. It has been working on process automation for more than a decade, since its 2010 acquisition of a software company named eGlue that pioneered a precursor to an attended automation solution. While NICE is an established player in the unattended RPA domain, attended automation remains a focus for the company.

Oded Karev is the general manager of Robotic Process Automation at NICE. He has been with the company working on RPA for eight years, and members of his team have honed their automation expertise over two decades. RPA Today recently sat down with Karev to talk about NICE’s evolution into RPA and why it chose to specialize in attended solutions.

Oded Karev: Unattended RPA has incredible value, but its scope is very limited. There is a limited number of processes the enterprise can hand off to an unattended bot to automate end-to-end. That’s why most implementations don’t scale as much as enterprises would like them to.

There’s no doubt that attended automation is a more complex solution than unattended automation. Attended automation is all about robots operating within the employee’s desktop, side-by-side with the employee, which creates obvious complexity. How do we automate processes and pop up relevant guidance flows while the employee is “interfering” with the robot’s work (typing, opening and closing windows and applications, logging in and out etc.)? Let’s say a bot has an automation that needs to pull some data from CRM and paste it into a Claims system. But, the employee has three different instances of CRM opened on their screen. How would the robot know which one it needs for the automation? Obviously, we equip our attended robots with the right intelligence for identifying the right CRM instance. NICE has been successfully delivering attended automation/ employee desktop process optimization solutions for 20 years now, and is actually the company who came up with the ‘attended automation’ term. The employee desktop is our natural environment and where we hold the vastest experience in the market, so these complexities are where we thrive and bring a lot of value to our customers.

Our goal is to maximize the impact of RPA and that can only be done with our attended offering. At the end of the day, most of our customers employ attended and unattended bots, which we think is the winning combination.

RPA Today: What are the front-office applications that make the most sense for RPA?

Oded Karev: Like any large-scale operation, the front office or contact center operations has many repetitive and mundane tasks performed by humans. They are non-value add activities and automating them will free the front office employee’s time to pay attention to the customer at hand. On top that, the front office has some unique characteristics for which the right attended automation capabilities can deliver huge value to the organization:

RPA Today: Is it more difficult to get organizations to invest in automation for attended applications than for processes that don’t require human intervention?

Oded Karev: ROI for automation is calculated by balancing the investment needed for getting the robot into production vs. the total time that the automated process is actually being executed and brings value. Considering it takes similar effort to deploy attended or unattended bots, and considering attended automation is deployed on thousands of workstations, naturally it is used at a larger scale that brings higher ROI. And, if you have multi-skilled attended bots, you can constantly increase your ROI by launching more and more automations without investing in more robot licenses.

Also, since unattended robots can only automate processes that can be executed end-to-end without human intervention, only seven to nine percent of processes can be considered for automation in the average enterprise. For the remaining 90 percent, then, the only way to bring great value from RPA is via attended bots.

RPA Today: Are employees more receptive to attended automation implementations because humans are still required for the process?

Oded Karev: As RPA became an integral part of every enterprise tech adoption plan, automation anxiety increased, and employees became concerned about RPA bots making them redundant and taking away their jobs. However, when employees are introduced to attended automation, they very quickly see the huge value it creates for them. Employees who have NEVA on their desktop, have an easier time on the job and are better performers. NEVA gives them tips on what they need to do or say, it provides them with quick links to relevant data or screens, and it automates some of their tasks. With proper change management employees easily see how the attended robot helps them achieve their KPIs and they are happy to have it and see automation as a positive innovation.

RPA Today: Scaling RPA has been an issue for end users trying to implement an automation strategy. Do you have recommendations for companies that have already started their automation journeys but are finding it difficult to scale their programs?

Oded Karev: It’s true that scaling the number of bots deployed in enterprises is still an issue and most have low number of robots live. Initially, enterprises were sold on the dream that RPA is easy and once you start it will scale by itself. This isn’t the case for any enterprise software and RPA is no different.

Our most scaled and successful customers have established CoEs that cover the full automation life cycle. They start by identifying the right automation opportunities utilizing our desktop process-mining tool, Automation Finder. It continuously identifies processes which are ripe for automation, allowing the organization to automate more and more processes.

Another way to scale is with attended bots. By definition, since they are installed on employees’ desktops, the number of bots deployed tends to be very large. As an example, our largest attended deployment to date includes over 35,000 robots, installed on employees’ desktops, with additional unattended robots supporting back end processes. I believe it’s the largest RPA deployment within a single customer site in the robotics market.

As you can imagine, when you install more bots, the impact grows as a result and the ROI from automation increases. So as you can see, the ingredients are there, and it’s just a matter of time before we’ll start seeing automation cover more areas of the business as well as more complex processes.

RPA Today: Living and working through Covid has a lot of organizations thinking about resilience and efficiency. How should RPA and automation fit into that thinking?

Oded Karev: Naturally, this is very vertical specific. Some industries were badly hurt by the pandemic, while others expanded their business in unexpected ways and unplanned-for paces. In a generic form we can say that most businesses had to restructure their processes and their workforce in some shape or form. Efficiency, side-by-side with cost effectiveness, became a must. RPA is a tool which is mainly used to gain efficiencies and cost reductions, so it was only natural that it was in high demand this year.

We saw the largest growth around the move to remote work. If we take service organizations as an example, they’re typically located in very large spaces, with service agents sitting close together, and supervisors walking the floor and assisting where they are needed. This year, the service operations were dispersed: each agent provided service from their home office, computer and phone.

Suddenly and without much preparation, agents lost the peer and supervisor support they had in a joint space. Management updates and policy changes needed to reach them in new ways. Also, in those businesses where demand for their product or service increased, they needed to do more with existing resources, since it was hard to scale up quickly to meet those demands.

Attended robots are the personal assistants for the “at-home” employee, providing them with real-time guidance as to what they need to say or do at every step of a process or a customer interaction. Management updates and policy changes are quickly communicated via the attended bot interface, so employees are up to date with new products/services/guidelines.

Also, since employees are remote, supervision is much harder. NICE’s long-term decision to invest in adding analytics and data gathering capabilities to attended robots has really borne fruit this year, providing our customers unique insights into what the remote employees are doing, what processes they execute and how productive they are.

Webinar Rebroadcast: How Desktop Process Mining Impacts the Success of RPA in Your Organization