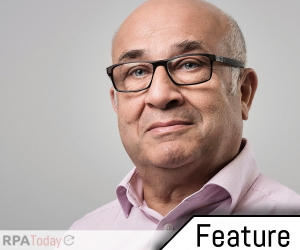 XpertRule is a U.K.-based automation software provider with DNA that reaches back to the prehistory of artificial intelligence. Akeel Attar, the company’s founder and CEO, met with an Edinburgh University professor and UK AI pioneer named Donald Michie. Michie, in turn had worked at Bletchley Park (once the top-secret home of the World War II Codebreakers) with Alan Turing, popularly known as the father of artificial intelligence.

Attar was inspired by Michie’s philosophy of teaching machines not by coding but by human example. The two worked on a venture that in 1985 resulted in the launch of XpertRule, which has evolved into a provider of AI automation software for complex problem solving via a unified low-code platform.

Recently, Attar sat down with RPA Today to talk about AI’s role in automating business processes, M&A activity in the AI space and his company’s goals for the future.

RPA Today: How does a company formed in the earliest days of the “AI Winter” of the 1980s survive and evolve over 40 years?

In the 1990s, we started applying our technology to solve some complex problems, especially in the areas of logistical optimization, customer service, and risk assessment. We ended that second phase with 360-degree view of AI technologies and how to apply them to solve real business problems. And as a company, we were profitable and stable.

Over the last eight years or so, we’ve developed viabl.ai. It’s the culmination of a journey of developing complex decisioning and machine learning algorithms, applying these over several hundred users worldwide, and transforming this into a state-of-the-art, modern stack, low-code platform.

RPA Today: What can viable.ai do?

Akeel Attar: Viabl.ai delivers two components that underpin intelligent automation. The first component is digital decisioning; the ability to suck data from all of an enterprise’s systems and turn that data into actions. These actions could be underwriting, diagnostics, problem resolution, planning, retention, negotiations. These are all intelligent decisioning actions, which our platform can actually automate.

RPA Today: Recently you’ve added some RPA industry veterans to your staff. How does that factor into the future direction of the company?

Akeel Attar: This obviously marks a transition in our thinking. We believe we have developed a unique platform. What we want to do now is scale. AI was an island not linked to intelligent automation. Then the RPA showed the world the value of intelligent automation by pulling data from any system. But RPA automates simple processes. I think with AI, there’s an opportunity to automate complex, high-value processes, predominantly decisioning. And, we believe that’s a massive market. So, getting veterans on board is our first step to scale the company.

RPA Today: Recently, we’re seeing legacy companies out there not just hiring, but buying AI companies. They need to understand consumer behavior and make better decisions in every area of their business. Do you think it makes sense to make that kind of commitment when tools like yours exist that allow them to have the benefit without the bother of an acquisition and integration?

Akeel Attar: Actually, this has been the story of AI. If you look back the companies that we grew up with, they either went out of business because they didn’t have a good business model, or they were acquired by companies in vertical sectors and completely absorbed.

But I don’t believe that is necessary now because I think AI platforms are maturing. The key thing is not actually the AI components, but the ability to have an enterprise-strength AI component you can embed successfully with enterprise systems.

While I think AI’s time is now, I believe there’s massive hype currently associated with it: the perception that deep learning or machine learning AI is the only game in town. And that is completely wrong. Deep learning from data has a big role to play in speech recognition, image recognition and natural text processing, but no deep learning system on earth can learn from data the complex conversations and expertise that a skilled call center agent needs to have to retain a customer.

Every person interested in intelligent automation should take note that, if we’re not careful, the hype could lead to disillusionment and we could see another AI winter.