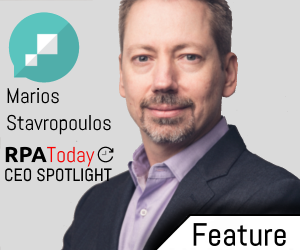 [Editor’s Note: In CEO Spotlight, we sit down with some of the most influential leaders in the robotic process automation (RPA) space to learn about their companies, their philosophies and where RPA, IA and AI are headed. CEO Spotlight will shine on every kind of player in the RPA ecosystem, from software vendors, to consultancies, to end users.]

Marios Stavropoulos co-founded Athens, Greece-based RPA technology provider Softomotive in 2005. From the beginning, Stavrolpoulos, the company’s CEO, has focused on empowering individuals to assert agency in the automation journeys undertaken by their organizations.

The company launched its first RPA solution, WinAutomation, in 2008 and, almost immediately, a community of enthusiastic users grew around the platform. From there, the business grew organically—opening offices in London and New York by 2015. In 2016, Softomotive launched ProcessRobot, automation software aimed at enterprises. The company netted $25 million in Series A funding in Sept. 2018 and has used it to expand into more global markets including Asia and the Middle East.

Stavropoulos’ ambition, however, is not just to grow Softomotive’s proprietary RPA technology, but to double down on his focus on the individuals using RPA and transform the way they learn about and engage with the technology.

Recently, Stavropoulos sat down with RPA Today publisher Steven Casco to outline his vision for the RPA space.

Steven Casco: WinAutomation has been successful for you. Beyond the platform, what can we expect out of Softomotive in the immediate future?

Marios Stavropoulos: WinAutomation has been very popular and has a strong community around it. The other solution we provide is ProcessRobot, which is essentially the same engine and underlying technology as WinAutomation but with additional features that provide the scaling, security and management tools that are essential for an enterprise deployment. ProcessRobot can be centrally managed and includes enterprise features like change control, high-availability, analytics, etc., that are integrated with the automation execution engine to provide the robust governance layer that’s required by many organizations.

Apart from those two established solutions, we’ve recently released a new technology called Robin. Robin is something we are very excited about. It’s a program language built specifically for RPA that will eventually be available as open source software. Our aspiration is for Robin to become a technology standard in the RPA domain that will enable automation portability across different tools and vendors.

Robin is something you can use either independently to build your own automations—without the need to purchase any additional tools or pay any license fees—or you can combine Robin with another tool that will provide the additional governance and management features that you might need. This means users can focus on process automation without having to worry about the peripheral functionality associated with a desktop or enterprise deployment.

Robin is designed as vendor-neutral, which allows users to avoid vendor lock-in and ensures their intellectual property is protected. This approach also reduces risk and delivers commercial flexibility as users don’t need to rely on a single vendor. We strongly believe this is going to be transformational in the RPA marketplace.

From now on, all Softomotive tools will be based on the Robin language.

Steven Casco: Our readers view RPA as a transformative technology—as the Internet was 20 years ago. Just like HTML or Javascript, no one owned those languages, but many vendors provided you with ways to use those languages to benefit your business. Is that how you see Robin?

Marios Stavropoulos: HTML is actually the example I often use to explain the rationale behind developing Robin. We had the Internet, but it wasn’t as useful for individuals and businesses as it could be. We had protocols like Gopher and FTP, unknown mostly today, but the revolution really happened once we had HTML, the technology that allowed everyone to start building web pages and web applications.

We believe Robin will have a similar effect in the RPA industry. We’re at a point where there are many creative forces in the space and Robin will unleash them. We’re very excited to see what happens from now on.

Steven Casco: WinAutomation started as a front-end desktop tool. How do you connect the front and back ends together to ensure that processes that might throw exceptions 10 or 20 percent of the time can be moved along properly with human engagement?

Marios Stavropoulos: This is an important topic. When it comes to unattended use cases, our tool of choice is typically ProcessRobot because it has a number of features designed for handling exceptions in an environment that often consists of headless services in a remote data center.

ProcessRobot includes a comprehensive exception handling mechanism that works at four different levels. We also have the capability to interact with an unattended automation, dynamically, but in an unobtrusive way. In this scenario, an administrator can, at any point, log into the server running an unattended automation and assist the robot if it needs some level of human intervention.

We also have a sophisticated exception log mechanism. Whenever something goes wrong, we capture images and video containing the relevant insights and information relating to the internal state of the automation. A developer, in a very short time, can use the log facilities to diagnose and correct problems.

Steven Casco: Aside from open source, which you’re obviously excited about, what other trends will assert themselves this year and into the medium term?

There are many differences between attended and unattended automations and, accordingly, they must be managed and measured differently. Attended automations are far more complex both in terms of factoring in the user-engagement mechanism but also capturing fulfillment and productivity as part of the ROI.

In attended automation, there are two approaches:

One: Take a centralized approach to building automations. You introduce a Center Of Excellence (COE) and the automations are built by specialist developers. The automations they develop are distributed, top down, to the end users.

Two: End users are engaged in building their own automations. I believe this is a truly transformative approach. I have seen how an engaged mindset really changes how an individual thinks about work. It’s powerful. In this approach you provide users with the tools and technology that enable them to take control over their own workload. This solves the problem of process discovery because the user who’s building the automation is also the person who manually executes the process—they are the expert. This approach will likely find processes that no COE or process mining tool will uncover and it promotes creativity and formal collaboration between users where they create automations and share them with their colleagues. In essence, a bottom-up approach creates a force multiplier in both process discovery and automation development.

Steven Casco: A lot of our readers downloaded WinAutomation as individuals, learned about it at home and brought it to their company. How do you educate or service this enthusiastic group of people?

Marios Stavropoulos: That is a common scenario. Users download and create something at home and then bring not only the product but also their knowledge and enthusiasm to the work environment. This remains a key method for us to penetrate the market. To support this kind of user, apart from the usual help resources, we have a free online training academy where users can learn at a pace that’s appropriate for them, leading to a meaningful certification and hopefully a transferable skillset. We also have RPA Ignition Teams—a program that gives users direct access to experienced automation professionals and other resources through formal in-person training and workshops.

As an example, I was recently with a customer who was running a workshop. Although the primary focus for the users was learning what they could do with our technology, some began building their own automations including an attendee who devised one that will potentially save 3,000 hours per year in her department. One user, one automation, 3,000 hours saved! It’s this kind of exciting result that can be generated by bringing users into a workshop environment.

Steven Casco: Having enthusiastic individual users is obviously positive. But are IT departments in their companies concerned that those individuals might be operating outside their control and procedures ensuring security compliance? How do you balance those competing forces?

Marios Stavropoulos: It’s an interesting question and can be a challenging issue. But it’s not that difficult to solve. And let’s not forget, the technology works on behalf of the user and any automation that’s executed works only within the domain and permission space that has been granted.

When it comes to the notion of “shadow IT” and specifically users creating their own automations, we know that IT departments are often under-resourced and over-utilized and this can be a bottleneck to progress at times so some form of acceleration, in many instances, is welcomed. On the other hand, there is a very reasonable concern about giving people too much freedom to automate when they may not fully appreciate the broader implications. We provide a set of governance tools that give IT, and/or other nominated teams and individuals,  complete visibility and control over what automations are being executed, where and when in their environment.

The key here is balance: the freedom for users to build their own automations—we see that as transformational—but combined with appropriate controls for the IT department to monitor and control automated activity.

It’s a fine line, but we shouldn’t discourage anybody from contributing to the wellbeing and progress of the company and without the right incentives, recruiting and retaining the brightest and best talent will get harder, as time goes by. Remember, the workforce we are talking about is increasingly made up of Millennials and Generation Z and these demographics tend to demand hands-on engagement; being able to make a measurable and meaningful contribution is key to them reaching their full potential.

Steven Casco: What is next for you, Sofotomotive and RPA in general?

To read the final part of this full length feature article, PLEASE fill in the form below, it’s FREE and then the article will automatically display.

PLUS: Additional Benefits Include:

Please take a moment and register.

Already a Member?
Please use the login form in the right column to view content.

Forget your password?
Send us an email (info@RPA-Today.com) and we’ll respond ASAP.