First Lesson: Look Before You Leap 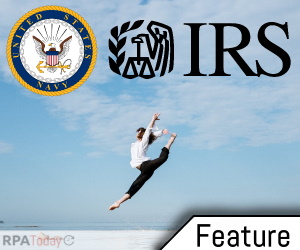 The Internal Revenue Service (IRS) and the U.S. Navy are two of the largest organizations in the world. The potential for outsized impact to huge enterprises by implementing automation strategies is enormous, and federal agencies in the U.S. government continue to be a valuable test bed that organizations of all kinds can look to for lessons as they try to leverage RPA and intelligent automation.

While the IRS and the Navy are at different stages of their RPA journeys with different strategies yielding different goals, their technology leaders agree the lessons  they’ve identified as they continue to scale their automation programs are generally applicable across agencies and enterprises. Both agencies have worked with UiPath technology when implementing their respective automation initiatives.

According to John Adams, deputy assistant secretary of Financial Management Systems for the U.S. Navy, it’s difficult to compete with aircraft carriers and SEAL teams for “wow” factor, but for the financial management community, reaching a full understanding of how automation could be employed to achieve its major goal faster was incredibly impactful.

“The Department of Defense is one of the last government organizations that is not auditable,” Adams notes. “We are on a journey to become auditable. As part of that journey, we had to figure out how we were going to consolidate our systems, clean up our systems architecture and standardize our business processes so we could support and independent public audit. So the ‘wow’ factor for us was understanding how much of an accelerator RPA is for that. We are able to leapfrog forward at a pace we were not previously able.”

Adams has grown RPA bot deployments from 10 RPAs in September of 2020 to more than 130 currently.

Through the Taxpayer First initiative, customer experience has become a priority for the IRS at large, according to Jaime Gracia, acquisition manager for the IRS’s Procurement Innovation Branch. For Gracia, procurement is an internal activity, but it became apparent very early, that RPA has enabled his unit to be more transparent with its customers.

Gracia points to one bot the IRS has in the field automating contractor responsibility—an activity mandated by the Federal Acquisition Regulation—that cuts the time a contracting officer spends on the federal System for Award Management (SAM) site from hours to minutes. It’s an example of the ability to provide more information faster to internal and external customers.

“We are really leaning into modernization and looking at ways we can use RPA as a force multiplier to allow our workforce to do high-value work and find different ways to automate our processes,” Gracia says.

The U.S. federal government is one of the largest consumers of RPA in the world. In a recent report, called The State of Federal RPA, the General Services Administration (GSA) noted the technology saved government agencies around 850,000 hours in 2020 and that its approach to RPA is rapidly maturing.

That means the experiences of Adams and Gracia add to the body of knowledge not only federal agencies can draw on, but private sector companies, as well.

For Adams, lesson number one is don’t “reinvent the wheel.” While his unit develops its own bots, it is adding to a growing library of code and governance principles that developers across the Navy, the Department of Defense and the entire federal government can leverage, and from which he says all should borrow. For those in the private sector, there are other resources they can tap for the same purpose.

“You often don’t have to develop your own RPA, somebody’s already done it,” Adams explains. “If you’re thinking of a bot, look around. Somebody may already have one that can save you a lot of time, effort and money. You might be able to take what already exists, make a few tweaks and leverage that particular RPA yourself.”

Garcia agrees, noting that the “shared services” model used by federal agencies led by the Community of Practice launched by the General Services Administration in 2019, has been one of the real advantages for government agencies exploring automation.

“It’s been great for us,” Gracia says. “We were really innovators in some of these processes that are almost standard across the federal government. We’ve been able to share information and our lessons learned with quite a few agencies who now have their own bots in development, who may be doing things a little different but are using our foundation. That provided value to them by helping them speed up their development models rather than starting from scratch.”

For Adams, in addition to taking advantage of existing bots and resources, the most important lessons unearthed by his experience include choosing the processes you wish to automate wisely; identifying a “bot champion” for each automation who can act as a liaison between the development team, the business line and other stakeholders.

“This is not something you can go off in a room and develop on your own,” Adams notes. “You have to work with the folks who are actually doing the process, taking their input and getting it right.”

Gracia agrees, and explains that the earlier you involve other stakeholders the better—especially one notable inclusion.

“Make sure you bring in the different players early,” Gracia says. “One of the most important areas to include are the cyber security folks. We’re trying to fail fast, create “minimum viable product” thinking and try to get prototypes in place in 30-60 days. We’re looking at speed and agility—not normally something you hear associated with procurement. And, to get these things done right, we don’t want to get into development and find we have not properly done our due diligence with our friends in the CIO. We don’t want to be in a place where we can’t get from development to production.”

And finally, Adams says, it’s important to ensure you honestly evaluate your progress. It’s likely that you will not get the automation completely right at the beginning. Monitoring and being willing to make incremental changes to perfect your automation will put you on a journey to scale.