George Mason Continues to Strengthen the Academic Study of RPA, Names Advisory Board 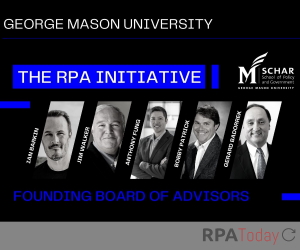 George Mason University, which has been at the forefront of establishing a track in higher education for RPA, has added a Board of Advisors that will guide its RPA initiative. The board will include several individuals who achieved some notoriety in the nascent RPA space, including Gerard Badorrek, the former CFO of the U.S. government’s General Services Administration (GSA). In that role, combined with his sponsorship of the GSA’s RPA Community of Practice, Badorrek oversaw the prioritization of automation in the U.S. federal government and a vast expansion in the use of RPA by federal agencies.

He will be joined on the advisory board by some of the most respected RPA pioneers in the public sector including Ian Barkin, co-founder of Symphony Ventures, a leading RPA consultancy firm, and co-author of the book “Intelligent Automation: Welcome to the World of Hyperautomation”; Anthony Fung, CEO and founder of Amplitude9 and former Deputy Secretary of Technology for Virginia; Bobby Patrick, chief marketing officer at UiPath; and Jim Walker, senior vice president of Public Sector at Roboyo, who led “first in government” RPA deployment at the National Aeronautics and Space Administration.

George Mason, given its Washington, D.C. location, has long geared its academic programs to focus on government. Its Center for Business Civic Engagement this year launched an initiative to examine how RPA has made government more effective. The advisory board will help guide the efforts of George Mason’s academic study of RPA and automation.

“We continue to build momentum and strengthen the Initiative to better harness software automation technology and innovation for public sector institutions and end routine and tedious jobs of employees, so their time can be focused on higher value work,” RPA Initiative co-founder Dorin Munteanu, commented on announcing the board. He continued, “our Initiative is privileged to benefit from the experience, creativity and vision of these accomplished individuals and together we will ensure the vision of becoming the prominent institution for the study of automation’s complexities and its ramifications on society.”