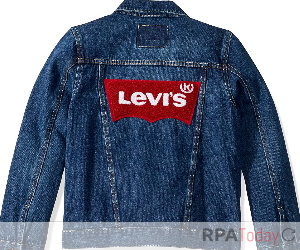 Citing what it called a “massive opportunity” to maximize the benefits of robotic process automation across its organization, Levi Strauss recently announced its first two RPA bots going live thanks to the efforts of an RPA Center of Excellence (CoE) launched several years ago. The San Francisco-based apparel manufacturer said its CoE team will continue to work with various business units across the organization to find automation opportunities and rethink processes with an eye towards scale.

“For a company to truly transform digitally, we must approach it from all angles: top-down and bottom-up. We’re ensuring teams across functions have the tools and services they need to work in a digital-first mindset,” Chief Financial Officer Harmit Singh said. “I’m extremely proud of the work our RPA team has accomplished. We are seeing not only an immediate reduction in operational costs but also increased employee satisfaction as teams can focus on higher-value activities. While RPA is common among tech and digital-native companies, it’s just beginning in the retail industry. It’s investments in services like RPA that keep us at the forefront of the industry.”

In their proof-of-concept phase, one bot automated the process Levi’s uses to invoice wholesale partners, which saved 500 hours of manual work in the year it has been in pilot. The other helped merchandise coordinators (MCs) enter product codes into their system ensuring stores had the right products for the season. That bot saved MCs 750 hours.

Levi’s said the RPA CoE team has been educating teams throughout the organization about the “value and power” of RPA. The company has developed a pipeline of around 50 new bots it hopes to deploy this year alone, which it predicts will save employees more than 20,000 hours per year on manually performing various processes.