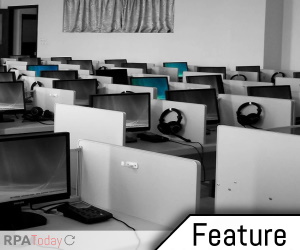 In the earliest days of RPA (a whole half-decade ago), some thought of the technology as a competitor to, if not an outright replacement for, offshoring. The notion was logical: offshoring was a way to shift work traditionally done by relatively highly paid internal employees to lower-cost workers in another country on an as-needed basis, while RPA could replace those workers entirely using automation and would cost even less. The business imperatives driving RPA and offshoring are the same: increase efficiency and free up internal resources to provide more value.

RPA, however, has not replaced outsourcing. In fact, since 2015, annual global outsourcing revenue has ticked up from nearly $89 billion to $92.5 billion last year.

Spending on RPA, on the other hand, is exploding. According to Gartner, in 2018 (the most recent year for which data is available) companies spent $846 million on RPA solutions—an increase of 63 percent from the previous year. And, the Stamford, Conn.-based consultancy predicted that by the end of 2019, RPA revenues would reach $1.3 billion.

So, instead of replacing offshoring, RPA has grown so quickly that many companies are finding they need to outsource RPA development work due to a lack of qualified homegrown engineering talent.

“We’re seeing company after company in multiple industries trying to hire RPA developers and they’re just not there in the numbers they need in the North American marketplace,” said Miguel Fernandez, chief business officer of outsourcing consultancy BeeckerCo. “They’re going outside the U.S. because the demand for talented engineers in this field is overwhelming and shows no signs of slowing down soon.”

And, a global pandemic will only serve to exacerbate the problem. The economic downturn caused by Covid-19 could persist through the end of this year and many of its effects could be permanent. Demand for RPA services that make companies more efficient and enable them to operate with less staff or endure hiring freezes will only increase, Fernandez noted.

Companies implementing RPA initiatives will outsource some or all of the development work for the same reason IT departments have been outsourcing for decades. Outsourcing is cheaper, it reduces business risk, increases flexibility, enables companies whose core competency isn’t technology to focus on their business, and gives them immediate access to experts and the latest technology.

Traditionally, the top countries for IT outsourcing were in Asia. In 2019, India, the Philippines and China topped the list of countries to which U.S. companies outsourced work. The countries are populous, have good education systems, yet are still developing. This makes them a deep well of relatively inexpensive IT talent that U.S. companies have been tapping for years.

According to BeeckerCo’s Fernandez, whose company specializes in securing outsourced talent in Latin America and Mexico, the answer is yes.

The remoteness of an offshoring company often makes travel difficult and can impede the overall efficiency of the work being done. Maintaining regular contact across different time zones can be challenging as well. And, large cultural differences and language barriers can stand in the way of healthy working relationships.

Recognizing the growth of RPA and the specialized talent companies would need to make it work, especially at scale, BeeckerCo embarked several years ago on an initiative to assemble a stable of software engineers expert in process redesign and process automation with certifications from the three largest RPA solution providers—Automation Anywhere, Blue Prism and UiPath.

Fernandez says several reasons companies might choose to leverage nearshoring talent from Mexico and Latin America rather than farther afield in Asia include time zone, distance and culture.

“Working in time zones 12 hours or more apart can put a strain on teams trying to coordinate calls and meetings,” Fernandez said. “Asian outsourcing firms can remedy this by having their developers work on a U.S. time schedule, but they often will charge more for this or they lose more talented engineers who simply don’t want to work those hours.”

Fernandez also noted that, while most RPA work can be done remotely, developers may be required to be onsite up to 20 percent of the time they are working on a project.

“From the airport in Mexico City, we are two hours from Los Angeles, Houston and Miami; and six hours from Chicago or New York,” he said. “If there are tasks that have to be done in person, our developers can be there quicker, not to mention how much easier it is for Mexican or Latin American developers to get a visa now under the new USMCA trade agreement, which was approved this week and will go into effect on July 1.”

Finally, Fernandez argued, it is easier from a cultural standpoint to nearshore with Mexican or Latin American tech talent. They have had more exposure to the U.S. and its customs and culture, which should make it easier for them to relate to U.S. project managers and employees.

“Practically all Mexican engineers have gone on vacation to the U.S. at least once or twice in their lives, especially those living near the borders,” he noted. “Also, thanks to a generation that has grown up watching Netflix, playing video games and perhaps even being educated in the U.S., many engineers have achieved a high level of English fluency.”

Outsourcing RPA projects will likely continue to gain popularity as the tech talent shortage in the U.S. persists. For companies exploring this option, nearshoring and offshoring will each present advantages and disadvantages. U.S. companies embarking on RPA initiatives that either can’t or don’t want to build enough development capacity should thoroughly assess the relative merits of each.