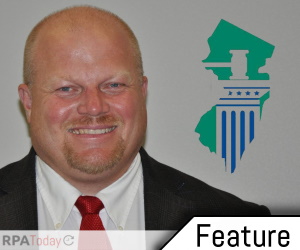 Sometimes a crisis reveals a new path. For the New Jersey court system and its CIO, Jack McCarthy, what started as a small experiment with RPA, blossomed into a movement as issues surrounding Covid-19 proved the technology’s value.

Along with New York, New Jersey was hit hard by Covid-19 before much of the rest of the country. As a consequence, organizations in the state weren’t prepared for stay-at-home orders. McCarthy and his team had an RPA pilot up and running with one process under their belt when they were faced with several challenges related to their employees going remote.

RPA Today sat down with McCarthy recently to talk about how Covid forced them to transition their RPA program from pilot to rollout and where he thinks automation will take the New Jersey courts from here.

RPA Today: As a public sector organization, how were you able to bring RPA on board?

Jack McCarthy: When RPA was still a buzzword, we went to a conference. Typically in our shop, we look for technologies we think are going to have value in the next year or two and we’ll buy a small license count in order to get a pilot together. A developer who was with us got really excited about it. He did research on his own, identified UiPath as a vendor he thought we could work well with and bought a few licenses. His staff got certified on the software on their own at night.

For our first automation, we did something very simple. We took the green card mailers that come in with signatures when we send certified mail. We were able to have an RPA product look at signature cards, read them, match the image to the specific person who signed the card and then put it in our case jacket.

It probably took a person eight hours a day to do that. A simple robot did the process in three minutes. So, we were able to see the value right there in that very simple process.

RPA Today: For many organizations, things progress slowly from that first process. What happened next?

Jack McCarthy: Covid hit and things changed. As we shut the courthouses down in March, I had three goals for our staff. I recognized the upcoming budget challenges we would experience as revenue dried up during a shut down. We were going to have to cut some costs. Second, we needed to keep people working out in the counties. We had 10,000 people who left their buildings on March 6 and we needed every way possible to keep them functional. Third, because all of our payment windows were closed, wherever we weren’t accepting online credit card payments, we had to rapidly move into those areas. And that’s where we recognized RPA could solve a problem for us.

We had already built a lot of the front ends to accept single payments online. But often when a judge levies a fine, it can be paid weekly over a period of time.

To automate those online time payments on the back end would have taken a few months’ worth of work. But, we found if we could get the data in through our payment system on the front end, we could have a robot read that data and push it into our backend systems.

This is something that maybe 20 people around the state would have been doing full-time on a daily basis. In about two weeks we built three or four robots that, in effect, process the payment by moving data across the system. We’ve taken in almost $10 million in time payments since the summer, which we wouldn’t normally have been able to do because the courts were all closed. It’s a small example of how we were able to do something quickly that enabled us to bring in revenues, get money into the system, and pay our employees.

RPA Today: Where are you looking for additional opportunities to automate using RPA?

Jack McCarthy: Had it not been for the pandemic, our goal was to start focusing on operations, finance, and HR systems.

But, now that we had success with the time payment process, we’re looking at our entire organization in places we might not have looked before, like criminal, civil, family and probation courts. We’re also heavily involved in a lot of the social justice reform areas including criminal justice reform, sentencing reform. We’re looking for opportunities in those areas where we can quickly stand up a few of these robots and have them perform the rote repeatable tasks they’re really good at.

RPA Today: State governments are not generally considered bastions of innovation. How is your organization different?

Jack McCarthy: My bosses, the Chief Justice and the Administrative Director, have provided us the ability to go out, find innovative technologies and make sure we have them in our tool kit when problems come up so we can react quickly. Part of that is training and investing in our staff learning. The staff have taken hold of all the resources they have at their disposal and they’ve run with it.

People are beginning to realize that when you come to work with New Jersey government, these are the kind of technologies you have the opportunity to work with. They’re surprised with some of the newer technologies we’re engaged with, including RPA. It’s a nice recruiting tool for us.

RPA Today: Was the non-technical staff concerned that you would use automation to reduce headcount?

Jack McCarthy: People usually see new technology as a threat at first. But, we haven’t seen that level of anxiety over RPA. The judiciary in New Jersey is a customer service agency first. So, the more automation we can put into effect, the more our staff is freed up to do other customer-focused things.

And, our history has shown we don’t really lay people off. So, the staff recognizes that if a technology is coming in that can automate a rote, time-consuming task they’re doing, they’re going to get freed up to do something else that’s rewarding for their career. We haven’t seen that as a problem and our history shows it isn’t.

RPA Today: What are challenges you see with expanding your RPA initiatives?

Jack McCarthy: Our biggest problem right now is budget. With the economic shutdown that occurred, what are the budget dollars going to look like? Our second challenge is staffing and talent. We have to make sure we can keep bringing in people who are willing and able to move projects forward

Our successes have shown that all the teams need to be leaning into RPA a little bit more. Fortunately, we have a great relationship with UiPath and they want us to be as successful as possible.

RPA Today: Speaking of budgets, how did you build the case for RPA in your budget?

Jack McCarthy: Our leadership does recognize the successes we’ve had in the past and understand the benefits that can come with an increase in the investment for technology.

Our criminal justice reform project is a great example. We run a risk assessment against people who have been arrested to assess whether or not they are a flight risk. This has allowed us to eradicate bail. The law requires we do this within 48 hours. For a human being, it might take three hours for them to pore through all the case files and look things up. Instead, we run an automated assessment that sweeps our system for data and spits out a score for the judge they can use to determine if the person needs to be in jail pretrial or if they can get out with monitoring. We’ve taken this process from three hours for a person down to 20 seconds with a bot. That equates to about $10 million worth of staff we can devote to the actual monitoring or to other projects.

My boss trusts us, because we’ve done the right thing for the eight years I’ve been here, that investments like this will continue to pay off.

RPA Today: What advice would you give to people interested in implementing RPA?

Jack McCarthy: Just get started. Even if it’s a small investment, make that investment. With RPA, get a win under your belt. Identify a small project you know will benefit and use that to market the technology internally for the future. Create a success and market it.