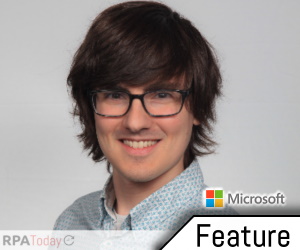 In May 2020, Software juggernaut Microsoft made an enormous splash in the automation world when it acquired RPA technology provider Softomotive. Under the agreement, Microsoft added the Greek firm’s WinAutomation product to its recently rebranded Power Automate platform. When a company as large as Microsoft turns its focus on a technology, it can shift the competitive environment in that space.

RPA Today publisher Steve Casco recently sat down with Stephen Siciliano, who came to Microsoft as part of its 2013 acquisition of MetricsHub, to talk about the company’s foray into RPA, how its automation platform has evolved and why companies should work to instill an “automation culture.”

RPA Today: Can you describe how Microsoft’s automation platform has evolved in the past four or five years?

Stephen Siciliano: When we started Microsoft Flow in 2016, we really wanted it to be a standalone workflow automation tool. For a few years, we were focused on the idea of personal productivity and business productivity working with cloud services and cloud-based applications like Office 365, but also third-party services like G Suite and Salesforce.

But we realized there were lots of scenarios where cloud-native connectivity was insufficient. In addition to automating Office 365, our customers also needed to be able to automate legacy applications. SAP, Java and other systems were a big part of the portfolios many of these companies had. We started to develop UI automation throughout 2019.

In November of that year, we relaunched as Power Automate. We did this to align ourselves more closely with the Power Platform and to signify our broader focus on automation beyond cloud-based workflow orchestration into RPA. The last step of the journey was acquiring Softomotive and adding WinAutomation to the platform.

RPA Today: What was it about WinAutomation that got you excited to add it to Power Automate?

Stephen Siciliano: WinAutomation has a real focus around citizen development, around ease-of-use for end-users. That makes it uniquely positioned to enable success for people who just want to sit down and start automating something for themselves.

There are a bunch of other things it has that other RPA vendors have as well, that we definitely wanted. Things like rich connectivity to a wide variety of applications, both modern and legacy. But the focus on individuals building automation on their own to help themselves be more productive is exciting to me.

RPA Today: You’ve used the term “automation culture” in the past. What does that mean?

Stephen Siciliano: It’s really around how we make everybody in an organization aware of the fact that they can have automation at their fingertips as a way to eliminate manual, repetitive tasks and promote their creativity.

There’s an activation energy that people have to expend to establish an automation culture. That means you have to spend time thinking about and understanding your processes. Once you do, and you’re automatically looking for things to automate, you are freed to pursue a more rewarding work life.

Establishing an automation culture is building this mentality across an entire organization, across all levels of an organization, from IT to key decision makers to support staff. At every level, people should be empowered to build automation, to be more efficient, to spend time on the things they enjoy doing.

RPA Today: When many end users get beyond the first few easy wins with RPA, the challenges become central governance, security and scalability. What is the best way to handle this?

Stephen Siciliano: I hear about this a lot. There is a fear in many organizations of “shadow IT.” This idea that if we empower everyone in an organization to build their own automation or their own applications, the firm will lose control and visibility of what’s happening. For us, however, Power Automate is inherently a centrally managed cloud-based offering.

When you download Win Automation – and this is a change we made on the first day of the acquisition – you sign in with your active directory information. We inherently have a link back to your organization’s directory to understand who is building automation. That can also provide visibility for your central IT department if they want to be able to configure who can and who cannot build automations.

It really goes beyond that. The exhaust of any process – how long it took, when it started, if it failed, if it succeeded – is present in the cloud infrastructure. So admins, if they want, can look across their entire organization and see, for example, who has created processes, what types of errors are happening, what types of connectors are being used. All of that visibility is just there by default because we are really focused on this cloud-native capability.

Our goal is to enable people to just sit down at work one day and start using the software. At the same time, we ensure that central IT has full visibility and governance, by default, over everything that’s happening in order to overcome this fear of shadow IT.

RPA Today: What is the biggest misconception in the marketplace about the Microsoft automation platform?

Stephen Siciliano: There are people who believe Power Automate is more of a consumer-focused automation tool. We may have contributed to that perception. It is absolutely true that Power Automate can be useful in personal scenarios, but we really don’t see ourselves as an “if-this, then-that” competitor. Our goal with Power Automate, and what we’ve been doing for a number of years, is giving businesses the tools to be more productive.

It spans from an individual in a business automating a process to make their own work life better to processes spanning hundreds of different steps and dozens of different participants at different stages. What we have today is a platform that can reach high-enterprise scale in a wide variety of scenarios and now that we’ve added RPA it can really touch any kind of enterprise app.

RPA Today: As a result of the Softomotive acquisition, what new features will we see and when?

Stephen Siciliano: The biggest thing we’re working on for the remainder of this year is bringing better connectivity and integration between the WinAutomation desktop client and the Power Automate cloud service. Today when you download WinAutomation you already do the active directory sign-in, but there are other things we are building that will make it easier to manage what you’re doing.

RPA Today: What is your long-term vision for Power Automate?

Stephen Siciliano: Ultimately, we want to empower everybody inside an organization to be more productive through automation. Even with WinAutomation, building automations still requires a little bit of a learning curve. To borrow a phrase, we want to flatten the curve. To make it much easier and more straightforward for anybody to get started. We believe that nearly everyone has some manual task that is taking their time and pulling them away from what they want to do in their job.

Our vision is to reduce the friction for automation so everybody can use it and really focus on creativity and the things that they enjoy doing. We’re not there today, but we’ve made a lot of progress on that front. WinAutomation already gives us a great start there and we’ll continue to invest in that as a primary area over the next few years.