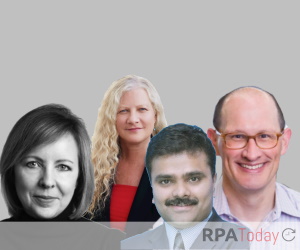 Major companies in the automation and RPA space recently made significant additions to their boards, adding heavyweight experience in both cases.

Process intelligence firm ABBYY added Aileen Allkins and Anubhav Saxena to its board. Allkins, who will serve as a non-executive director, is a U.K. consultant who most recently was corporate vice president of Global Customer Service and Support at software giant Microsoft. Prior to that, she led worldwide software support at Hewlett Packard Enterprises.

Saxena is a former executive vice president and chief of Global Alliances at RPA technology provider Automation Anywhere. Currently, he serves as chief growth officer at HeadSpin, a company that provides a platform for digital experience monitoring.

New York City-based RPA technology provider UiPath announced it has added Michael Gordon and Kim Hammonds to its board of directors.

Gordon, who will also serve as chair of the Audit Committee, was COO and CFO of online advertising and marketing firm Yodle. Hammonds is currently a senior advisor and non-executive director for several technology companies including Zoom, Box and Tenable. She is also a former COO at Deutsche Bank and CIO at Boeing.