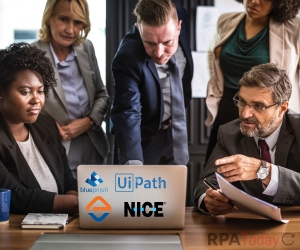 When is your sector officially hot? When Gartner decides to produce a “Magic Quadrant” for it. And, for the first time, the global IT consultancy has turned its examination toward the robotic process automation space, noting that “business executives are lining up to sponsor new RPA initiatives” and that “the buying tornado that has ensued is driving up the valuations of the biggest vendors and causing new players to rush into the market.”

Magic Quadrants use a proprietary analysis to place industry vendors in a graph that plots “ability to execute” on one axis and “completeness of vision on the other.” Companies that exhibit a high degree of both (those in the upper right “quadrant”) are identified by Gartner as “leaders” in the space.

The Stamford. Conn.-based consultancy evaluated 18 RPA providers and named three of them as leaders: Automation Anywhere, Blue Prism and UiPath. EdgeVerve Systems and NICE were tabbed as “challengers” and Another Monday, Pegasystems and WorkFusion as “visionaries.”