Did RPA Break the PPP? 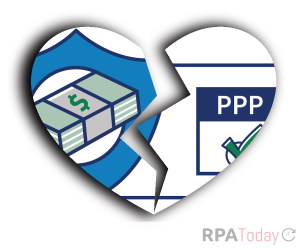 In the wake of stay-at-home orders implemented to slow the spread of Covid-19, the federal government offered assistance to small businesses in the form of forgivable loans called the Payroll Protection Program (PPP). There has been such high demand for these loans—and problems associated with large, well-resourced companies like restaurant chains taking a lion’s share—that RPA providers responded with programs to help small businesses automate the process of applying for them.

During the program’s second go-round, which began on Monday, April 27, the system crashed within minutes, and RPA apparently had a hand in the chaos. After most banks were unable to process PPP applications with the Small Business Administration (SBA) on that Monday, the agency announced on Tuesday, April 28 that it would not allow RPA software to integrate with its portal.

“Starting today,” the SBA said in a statement to banks, “Robotic Processing Automation (RPA), which are robotic systems used by some banks to mimic human data entry, may not be used to submit Paycheck Protection Program loans into SBA’s E-Tran loan system. RPAs burden the processing system and diminish its capabilities. Without RPAs, the loan processing system will be more reliable, accessible, and equitable for all small businesses.”

While the SBA identified RPA as the culprit, however, some experts point to the agency’s systems and that it was unprepared for the crush of applications it should have expected.

“It is completely logical to use RPA to submit loan applications, especially with the urgency small businesses have in getting their applications submitted and processed as quickly as possible,” Maureen Fleming, program vice president for intelligent process automation in the market research and advisory group at IDC, told RPA Today. “There would not be a problem if the architecture of the SBA’s portal was scalable.”

Fleming said a commercial business in the same situation would likely have utilized the cloud for the application and, while the U.S. federal government does support cloud infrastructure, its bureaucracy doesn’t allow it to move quickly in unusual situations.

“Blaming a type of technology that exposes scalability problems that the SBA was aware of and failed to deal with correctly is unproductive,” she noted. “The SBA failed to properly plan for this program, even though it seems they were aware of scalability as a problem. Had they planned, created alternatives, and clearly communicated to the small banks to give them time to respond, no fingers would be pointed now.”