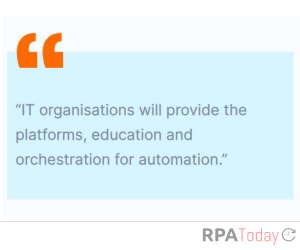 CIOs in Europe are responding to the changes in business conditions driven by Covid to engage more fully with automation in their organizations, according to the results of a new study.

The research, conducted by CIONET for UiPath, found nearly a third of IT executives in Europe think replacing legacy systems entirely is the best pathway to enterprise automation, which they deem necessary as the pandemic has shifted the nature of work. Indeed, 50 percent of CIOs polled in the study cited the rise of hybrid working (and the notion that it is here to stay) as the most compelling driver of RPA and intelligent automation implementations.

The report, titled Toward The Fully Automated Enterprise, notes the CIOs vital role in supporting enterprise automation, despite some unease with the increasingly popular idea of citizen development. To reach scale with automation initiatives, it will be important for CIOs to spearhead business process redesign, put standards in place that enable scale, fully support RPA and other intelligent automation pilots and put proper guardrails in place that ensure security around the new technology.

“While our discussions suggest the implementation of intelligent automation is still at an early stage of maturity, they also indicate it already heralds a fundamental change in the way businesses operate,” the report’s authors wrote. “IT organizations will provide the platforms, education and orchestration for automation, process mining and associated technologies, while the various functions across the rest of the business will adopt a ‘citizen’s development’ charter based on low code/no code.”