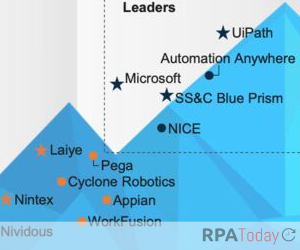 The Everest Group, a global technology consultant based in Dallas, has released its annual evaluation of the robotic process automation software market. The company, which produces a “PEAK Matrix” report for dozens of technology sectors, named Automation Anywhere, NICE, Microsoft, SS&C Blue Prism and UiPath as its top performers in the RPA space.

The consultancy ranked 23 companies in the RPA space on two axes—”market impact” and “vision and capability.” It separates them according to their position on the matrix into “aspirants,” “major contenders” and “leaders.”

“The post-pandemic era is repeatedly stress-testing organizations’ abilities to adapt to a volatile world through rising inflation, an economic slowdown, geopolitical tensions, supply chain disruptions, and talent shortages,” Everest Group said in a statement. “As corporate executives go back to the drawing board to re-examine their strategic priorities, they are increasingly regarding automation as a strategic initiative to emerge successful amid these uncertainties.”