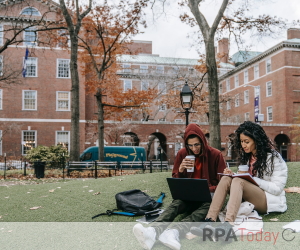 As an emerging technology, there is no standard educational track for students who are interested in learning the expertise that could point them toward RPA and automation as a specific profession. But programs are springing up at universities around the world—perhaps paving the way for academic degrees in the future.

UiPath, which established a partnership in the U.S. with George Mason University in January to explore opportunities for RPA in the public sector, has launched an automation school in Ireland. The APB School of Automation will create “a new generation of RPA developers with vocational and life skills that are highly sought after,” according to its CEO, Marc Cooper.

Separately, U.K.-based RPA firm Blue Prism is hoping to educate its new generation of RPA-educated experts in India. The company has partnered with V.R. Siddhartha Engineering College in Andhra Pradesh, India to train faculty and students in intelligent automation technology.

D. Rajeswara Rao, head of the institution’s computer science and engineering department, told The Hindu that exposure to the technology through the seven courses available will give students an advantage in the job market.