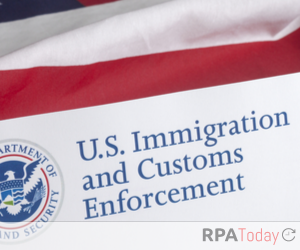 The United States federal government continues to build out the infrastructure that will enable its ongoing investment in automation technologies to make it more efficient. This week, the Immigration and Customs Enforcement Agency (ICE)—a unit of the Department of Homeland Security—released an updated request for companies, including those engaged in intelligent automation and hyperautomation, to bid on parts of a $340 million contract.

The Scalable Ways to Implement Flexible Tasks (SWIFT) contract will cover a range of services within ICE’s new center of excellence. The $340 million value will be split among up to eight winners (two are reserved for small businesses in the hyperautomation domain).

The recent update to the solicitation stated that the government will post the responses to industry questions via an amendment as soon as possible.

According to the most recent RPA Playbook, the document produced by the General Services Administration’s RPA Community of Practice for the U.S. federal government, the opportunity for RPA and other process automation technologies to transform federal operations is massive. Ongoing efforts to scale programs within the federal bureaucracy have yielded startling results so far and the GSA expects net capacity gains could be worth $3 billion.