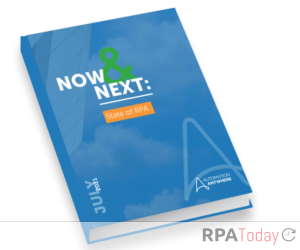 Of the organizations actively using RPA, 49 percent report they have deployed less than 10 bots, but nearly 40 percent expect that number to rise to between 11 and 50 total bots in the next 12 months, according to the results of a new survey. Another 18 percent predict they will have deployed between 51 and 100 bots during that timeframe. But efforts to scale RPA and automation programs are being hampered by the difficulty of finding training employees in the technology.

Automation Anywhere’s Now & Next: State of RPA report found a drastic move to cloud delivery of RPA has set the stage for rapid growth of the technology. From September 2020 to March of 2021, the proportion of businesses that said they are actively scaling RPA grew from 21 to 23 percent and those deploying broadly across a few business units rose slightly from 31 to 32 percent. Only five percent of those polled in 2021 said they had no RPA plans at this time. That’s down from 10 percent in September of 2020.

In addition to cloud delivery, another factor driving RPA growth is organizations are looking more favorably on citizen developers rather than restricting automation technology to the IT department.

“Compared to six months ago, far more organizations either broadly encourage citizen developers or allow them to participate in select business areas (53 percent compared to 40 percent),” the report’s authors wrote. “Significantly fewer organizations disallow citizen development today, with the percentage dropping from 35 percent to 24 percent in the last six months. Automation Anywhere has seen a similar trend with our customers, signaling that true citizen bot builders, who are non-technical resources, are being empowered to solve problems for themselves and their teams. Many organizations see this as an important step on the road to scalability and democratizing automation.”