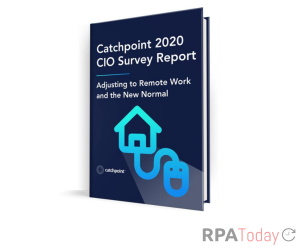 One of the most profound changes that happened during the Covid-19 pandemic was the drastic shift to work from home. Nearly three-quarters of U.S. employees worked at least part-time from home as business closures took effect. According to a new report, while the percentage of remote employees will settle, it will do so at an elevated rate. After companies have returned to a more normal operational stance, organizations expect 42 percent of their work force to work from home at least some of the time. That fact has significant ramifications for U.S. businesses and the technology they use—including automation and RPA, according to digital experience monitoring firm Catchpoint.

One of the areas of focus for the report was on the work-from-home tech stack offered by different companies. The survey classified respondents based on how well they were operating during Covid-related shutdowns of physical locations. They found three distinct tiers of companies in terms of a set of business and IT metrics.

Top-tier organizations were nearly twice as likely to be implementing RPA solutions and 50 percent more likely to be using other technology solutions to automate routine business tasks than bottom-tier companies.