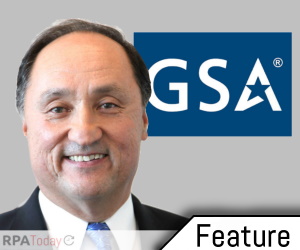 Because of its size, scope and the relatively manual nature of the processes across its many agencies, the U.S. federal government is uniquely positioned to benefit from automation, in general, and RPA particularly. Simultaneously (and serendipitously), several years ago, the technology came to the attention of staff in various agencies of the government at the same time the executive branch had articulated a shift from low- to high-value work as a governmentwide focus.

Since RPA aligned so well with the administration’s stated goals, RPA implementation became an important initiative. But who would lead? The General Services Administration’s (GSA) Office of the CFO, which had launched that agency’s own RPA program and had been sought out by other agencies for its expertise, accepted the challenge.

In 2019, the GSA CFO established the RPA Community of Practice (CoP) to drive the adoption of RPA by bringing agencies together to share ideas and solve common challenges. In early 2020, that vision was realized when the GSA released its first RPA Program Playbook providing agencies a framework and general principles to follow when implementing their own RPA programs. Most recently, the CoP released a detailed study examining how those efforts have been progressing and the scale and maturity of the various RPA programs that have been implemented by various agencies.

RPA Today recently sat down with Gerard Badorrek, chief financial officer of the GSA, executive sponsor of the Federal RPA CoP, and co-lead of the governmentwide effort to shift time, effort, and funding from low- to high-value work. In a wide-ranging interview, Badorrek talked about gaining practical knowledge of RPA through implementation within the GSA, planned updates for the RPA Program Playbook and what may lie ahead as a new administration assumes control.

RPA Today: When the GSA was asked to take the lead in bringing RPA to the federal government, how much self-education was necessary? What did you do first?

Gerard Badorrek: We aggressively pursued RPA opportunities internally first, because we saw the potential value. In January of 2018, the CFO office had no expertise with RPA and we started with a goal to put an RPA application in production in 100 days. Our success in implementing RPA during that first year led other agencies to come to the CFO office to understand how they could progress in RPA implementation.

That’s what led to our decision to launch the RPA Community of Practice (CoP) in April 2019 and where we took a more concerted role providing counsel governmentwide. We wanted agencies with RPA expertise to be able to share approaches and solutions across agencies and work together to solve common problems. The attitude and teamwork within the CoP have been terrific, we have always had leaders from multiple agencies that are helping lead and support the CoP.

The leadership of the GSA RPA program and the RPA CoP in helping new agencies grow their RPA programs caught the attention of OMB. GSA was asked to take the lead on the rollout of RPA governmentwide and received a modest level of funding to further develop the CoP as part of Cross-Agency Priority Goal 6 of the President’s Management Agenda: shifting from low-value to high-value work.

RPA Today: Do you plan to update the RPA Playbook soon?

Gerard Badorrek: Our approach to updating the RPA Playbook is through supplements that address new topics that are of interest to the community instead of putting everything into a new playbook. As we announced during its rollout, it is an evolving product.

Since launching the playbook in January 2020, we’ve released an addendum on establishing effective internal controls and we’re considering updates on intelligent automation and credentialing. We expect our next update to be released in the first half of next year.

We’ve also created some other significant products, including the Federal Use Case Inventory, which captures RPA use cases from across the federal government and enables agencies to tap into existing automations, and the State of Federal RPA, a report that provides a comprehensive and insightful analysis of the adoption and impact of RPA in the federal government.

RPA Today: What is the most exciting RPA project currently under development and what agency is implementing the project?

Gerard Badorrek: There are so many great examples of RPA being used by our partners in government today, that I’m not able to pick just one. My excitement about the potential of RPA projects falls in three categories: governmentwide applications; outcomes; and rapid application to emerging crises.

We continue to think about some functional verticals across government, such as human resources, finance, or acquisition, where we could implement an RPA automation that is utilized governmentwide. This could have a really big impact for improving efficiencies across agencies. We haven’t implemented that yet, but I do not think we are too far away.

Another way to think about what’s exciting is in outcomes. For example, I recently learned of a bot at the Social Security Administration that improves how the agency works with the public by making customer service better. Success stories like these are great for getting other agencies to understand the value of and work toward the adoption of RPA.

Finally, it’s important to highlight the value of RPA to provide an immediate benefit in response to crises. In response to the Covid-19 pandemic, several agencies launched automations that helped aid the federal response. These bots were able to automate tasks that would otherwise require human input and that are vulnerable to human error.

RPA Today: The current administration put a lot of emphasis on developing and implementing RPA programs. Will that still be a priority for the GSA in a new administration?

Gerard Badorrek: I can’t predict the priorities of the new administration, but I believe RPA holds a lot of promise and that it’s here to stay. Every administration is focused on progress to be made in a more efficient and effective government.

RPA is a proven tool for driving efficiency and value and I expect to see the continued proliferation of RPA, with new programs emerging and more mature programs developing at agencies where RPA already has a strong foothold.

We will continue to help individual agencies overcome the technical, managerial, and operational challenges that arise in designing and deploying effective RPA programs and convert RPA enthusiasm into action.

RPA Today: Are there other technologies that are higher priorities for federal agencies?

Gerard Badorrek: I’m sure there are, but that doesn’t mean that RPA shouldn’t be a high priority because of its ability to drive immediate benefit. Also, we will continue to move up the curve in terms of intelligence, which will help proliferate other technologies like smart optical character recognition, smart robotic process automation, and chatbots.

There’s also the value and cost efficiencies that you don’t get with other technologies. Every agency is feeling the pressure to do more with less and these technologies can help achieve that goal.

RPA Today: What are your goals to increase the number of agencies using RPA or number of bots across the federal government?

Gerard Badorrek: As the co-lead of the Cross-Agency Priority Goal focused on shifting employees to higher-value work from less satisfying tasks, I would like to see the number of active automations grow exponentially. Given the accelerated path that many agencies are taking and the knowledge-sharing that is taking place in the RPA Community of Practice, this can be accomplished.

As you think about potential scale in the government, this could have a huge impact. With about 2 million civilian employees, we could be driving billions of dollars of value annually with increased adoption.

RPA Today: Has RPA been a tough sell to the rank-and-file? Are they worried about being automated out of their jobs or have they seen enough examples of “shifting from low-value to high-value work” that they are comfortable?

Gerard Badorrek: This is a really important question to me.

I made sure to communicate early and often that RPA is not a job- or budget-cutting exercise. RPA is about generating additional capacity. If you make the conversation about cutting jobs and budgets, that creates a disincentive to process owners, alarms employees, and ultimately jeopardizes adoption.

Federal employees not having enough work to do is a myth. The reality is that there is plenty of important work to go around. We have backlogs to address and citizens who are expecting more out of their government. As RPA generates additional capacity in organizations, we are enabling an increased focus on customer service, innovation, and critical thinking.

My last point is that RPA is an employee-centric technology. Employees are involved in identifying, documenting, improving, and automating processes and it would not be possible without them. The technology brings teams together in new and exciting ways; end users, system owners, security personnel are collaborating and improving the way work gets done. It’s fun and rewarding. Employees continue to come to us with ideas, because they see the value and benefits this could bring to their day to day work lives.

RPA Today: Are some agencies more receptive to the idea of automation than others or are they all on board?

Gerard Badorrek: Each agency is unique, and some are more receptive or more enthusiastic than others. Each agency is evaluating the potential based on its individual needs, security posture, resource availability, etc. As a believer in the potential, I am doing my best to lead by example to show hesitant agencies the measurable benefits of automation.

We are currently piloting a mentoring program that will tap into the experience of agencies with mature RPA programs to assist agencies new to the world of RPA get their programs off the ground. Making sure the community is sharing knowledge and tools will help encourage adoption and bring everyone on board together.

RPA Today: Is your evaluation process for RPA vendors different than what they encounter in the private sector? How so? What advice would you give vendors who want to work with the GSA and other federal agencies?

Gerard Badorrek: There are very specific acquisition procedures for the government involving open and fair competition. Having worked in the private sector, I can tell you at a high level the evaluation criteria are similar. With RPA, we feel fortunate to see a robust marketplace filled with innovative solutions.

RPA Today: For end users in the private sector, what’s the best piece of advice you would give them when establishing an RPA program for the first time?

Gerard Badorrek: Just get started with a simple process, you will learn a lot along the way. Focus on short-term wins and positive momentum, 80-to-90 percent solutions in weeks versus 100 percent in a year or more.