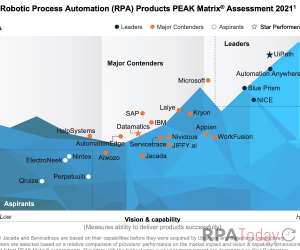 The Everest Group, a global technology consultant based in Dallas, has released its annual evaluation of the robotic process automation software market. The company, which produces a “PEAK Matrix” report for dozens of technology sectors, named Automation Anywhere, Blue Prism, NICE and UiPath as its top performers in the RPA space.

The consultancy ranked 23 companies in the RPA space on two axes—”market impact” and “vision and capability.” It separates them according to their position on the matrix into “aspirants,” “major contenders” and “leaders.”

RPA technology evaluated by Everest Group for the report include solutions from: Alwozo, Appian, Automation Anywhere, AutomationEdge, Blue Prism, Datamatics, ElectroNeek, HelpSystems, IBM, Jacada, JIFFY.ai, Kryon, Laiye, Microsoft, NICE, Nintex, Nividous, Perpetuuiti, Qruize, SAP, Servicetrace, UiPath, and WorkFusion. While the company sells a version of the report on its website that includes a full market and trend analysis, the graph showing the relative positions of the companies included in the evaluation is publicly available.

The effects of industry consolidation are apparent when comparing this year’s evaluation to last year. New entrants to the list include IBM, Microsoft and SAP, all of which entered the space via acquisition. Returning to the list after being acquired by Saleforce’s MuleSoft, is Servicetrace.