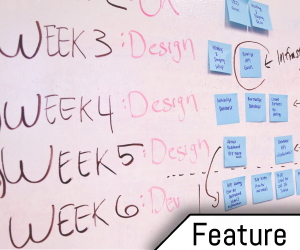 The roots of robotic process automation (RPA) lie in screen-scraping technology of the 1990s. Combined with optical character recognition and the ability to automate and manage workflows in low- or no-code environments, the technology evolved in this decade to become an important tool for business. Where it goes from here as it combines with artificial intelligence and what it can enable in the future is an open question. In many ways, though, 2019 was a pivotal year for RPA—the year it emerged from infancy to, if not outright adulthood, at least its adolescence. Two events made the past year notable for RPA and served as indicators that the technology has come of age.

A magic year… Opinions abound about global IT consulting firm Gartner and its Magic Quadrant series of research reports. What a specific company’s inclusion and positioning in one of the reports actually says about it is up for serious debate. What the report’s existence itself says about the significance of the market that spawned the companies being assessed is far less ambiguous. When the Stamford, Conn.-based consulting firm devotes resources to researching the companies in a certain industry, the technology is receiving attention from a far broader audience.

In the past 12 months, Gartner has produced Magic Quadrant reports rating the completeness of vision and ability to execute of companies competing in nearly 150 different markets. 2019 was the first year Gartner released a Magic Quadrant for RPA.

“When is your sector officially hot?” asked RPA Today in July. “When Gartner decides to produce a ‘Magic Quadrant’ for it. And, for the first time, the global IT consultancy has turned its examination toward the robotic process automation space, noting that ‘business executives are lining up to sponsor new RPA initiatives’ and that ‘the buying tornado that has ensued is driving up the valuations of the biggest vendors and causing new players to rush into the market.’”

Gartner also predicted that sales of RPA solutions to businesses would surge 63 percent during 2019 from $846 million to $1.3 billion.

…With unicorns. In 2019, two RPA providers on opposite coasts of the U.S. raised nearly $1 billion between them.  In June, New York City-based UiPath netted $568 million in a Series D funding round. Then, just two weeks ago, San Jose, Calif. company Automation Anywhere announced it had received $290 million. The most recent rounds vaulted the valuations of each company to around $7 billion.

Those are staggering numbers for just two companies in a single year and, in each company’s announcement of their respective funding, they spoke of RPA in terms of an entire industry attracting the attention of the world.

“Never before has there been such a transformative shift in the way we work, with artificially intelligent software bots changing how people, processes and technology interact for productivity gains,” said Mihir Shukla, CEO and co-founder, Automation Anywhere. “This new funding reinforces the promise of the RPA category and empowers our customers to achieve greater business agility and increased efficiencies by automating end-to-end business processes—bridging the gap between the front and back office.”

“We are at the tipping point,” Daniel Dines, co-founder and CEO of UiPath said this summer. “Business leaders everywhere are augmenting their workforces with software robots, rapidly accelerating the digital transformation of their entire business and freeing employees to spend time on more impactful work. I am humbled by the amazing support our customers, partners and investors give us every day, inspiring us to work harder to evolve RPA as the platform that not only unlocks the true potential of AI, but also other emerging technologies.”

The story of RPA in 2019 was still one of growth, not maturity. So, despite the events of this year, the story of the technology is not written. Stay tuned to RPA Today in 2020 for coverage of the milestones that could make next year even bigger.