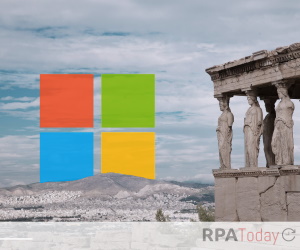 On the heels of its acquisition of RPA provider Softomotive, Microsoft has announced plans to create an RPA development hub in Athens, Greece.

Greek officials, including Prime Minister Kyriakos Mitsotakis, welcomed Microsoft along with another global high-tech firm to the country, calling its ability to attract corporate investment during the coronavirus pandemic a “milestone moment.”

Since announcing its entry into the RPA space last November, the Redmond, Wash.-based software giant has continuously bolstered its RPA capabilities and offerings. The company quickly followed up its initial volley with announcements regarding channel partners and investments in process mining.

But the biggest move came only a few weeks ago when Microsoft acquired Softomotive. While the technology provider now is based in London, it was founded in Greece in 2005.

“This is a really great development, which in fact, came about during a very difficult time for the country,” Mitsotakis said during the teleconference. “[It] demonstrates that we can do so much more to support the environment of our startups and to create the conditions that will attract more capital to the country, create new jobs, and showcase the ecosystem of Greek startups abroad.”